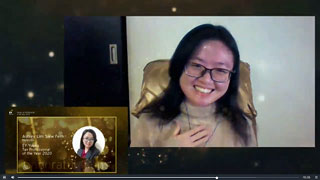 Malaysia dominated the international stage of the Ernst & Young Young Tax Professional of the Year (‘EY YTPY’) when Ashley Lim Siew Fern, a Bachelor of Commerce (Hons) student, was announced as the Champion. Ashley was named as the 2020 EY YTPY at the competition’s Global Awards Ceremony held on 2 December 2020. A total of 32 participants took part in this year’s competition where most of them are postgraduate students and professionals in the tax industry. Ashley was among the very few who are still undergraduate students in this competition. Despite facing stiff competition from working professionals, Ashley gave her very best and as a result, in becoming Champion, she also claims the honour of being the first Malaysian to have won the champion title at the global level.

The journey that led to Ashley’s historic win was not without its challenges. “Lack of time was the biggest challenge I faced. Within one hour, I needed to understand the 3-page case study, prepare 4 slides for presentation as well as prepare myself for the 15- minute presentation and Q&A session with the judges. It was a nerve wrecking experience as I had to do a lot of thinking and processing and with limited time, it was a very intense period for me,” Ashley recalled.

“After 15 minutes into the competition, I became a bit anxious as I was focusing on the time limit. So, I actually took a short break to clear my mind before resuming my analysis. This time, I was able to focus better and was ready to present my proposal to the judges. Two of the judges hail from companies which are prestigious clients of EY while another is among the top leaders in EY. Knowing their backgrounds helped me understand their areas of interest which are the commercial application of the tax implications and how real-world events and trends affect the entity’s strategic plans. Based on this, I developed the relevant analysis and useful advice which are practical to the judges”, she explained.

The winners were announced by Ms Jennifer Wishnie who is the EY YTPY sponsor and EY Global Tax Talent Leader. “Before announcing the name of the winners, Ms Wishnie shared a line or two to summarise the judges’ feedback for each contestant. When it came to my turn, Ms Wishnie highlighted that the judges were impressed by my vision of the future of tax and she highlighted I had the ability to give the judges a ‘wow’ experience. Upon hearing this, I was happy to learn that I had the skills and competencies to understand, analyse and produce excellent tax and non-tax-related advices and strategic plans to help organisations move forward,” Ashley continued.

Besides the competition, participants also had the chance to interact with EY’s key personnel from across the globe as well as experts from the International Tax and Transaction Services Department. Ashley also gained valuable experience in interacting with other participants from other countries as well as undergoing a training session on presentation skills. “As Champion, I have the option to either choose the 30-day world trip which includes three stops at EY centres in New York, London and Hong Kong or a number of technology gadgets and resources as well as networking opportunities,” Ashley revealed.