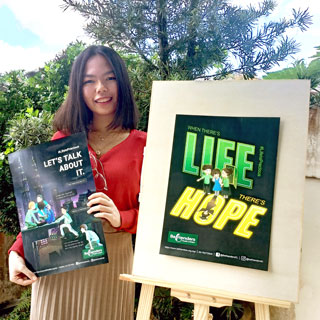 Hitting a home run in the ACA Championship Malaysia 2021, Tunku Abdul Rahman University College (‘TAR UC’) student, Teo Sze Ting emerged victorious as the national champion during the Grand Finale Virtual Event which was held on 24 June 2021 after competing against 29 other finalists from more than 10 institutes of higher learning. The championship is an annually held global design competition which tests students’ design skills using Adobe Photoshop, Illustrator and InDesign, where the top 3 winners of the national level will represent the country at the global stage.

This year’s championship required participants to design posters on suicide issues and prevention for Befrienders Kuala Lumpur. In the first stage, participants were required to design and submit their poster with the theme “Let’s talk about it”. The first stage of the competition saw a participation of more than 700 participants from approximately 80 institutions of higher learning. The top 30 finalists were then selected for the final stage of the championship where they were required to design another poster with the theme “When there’s life, there’s hope”. The finalists were given 8 hours to complete the poster and were required to livestream their designing process via Discord before submitting the final artwork to the competition judges.

“This competition was challenging especially at the final stage as I was not used to designing artworks in 8 hours. In addition, we were not allowed to refer to online sources for ideas, which means, we really needed to rely on our creativity to come up with an impactful concept for the poster. At the same time, I was also excited as the competition pushed me beyond my comfort zone to use my knowledge and skills to produce posters touching on an important issue that is prevalent in our society today,” said Sze Ting who completed her secondary education in Sekolah Menengah Kebangsaan Datuk Patinggi Haji Abdul Gapor in Kuching, Sarawak.

Although the competition was challenging, Sze Ting, a Bachelor of Creative Multimedia (Hons) student, learned valuable skills and experience as a participant. “The experience of designing the posters under pressure is unforgettable and with this win, I have learnt that I can certainly perform under pressure. Besides this, I managed to obtain certification for Adobe Certified Associate in Visual Design Using Adobe Photoshop along the way, which would add value to my resume and portfolio. Another important lesson I have gained from this competition is my deeper understanding and awareness on the issue of suicide. As we know, the pandemic has caused great distress in our communities where many have had thoughts of suicide. The research and readings I have done about suicide have not only helped me to design the posters for the competition, but the findings have enhanced my knowledge about the subject matter. By capitalising on my designing knowledge and understanding of the subject matter, I am very proud to have produced the posters that will drive greater awareness about an important issue that is affecting our society,” Sze Ting continued.

Sze Ting is the second student from TAR UC who will be representing Malaysia to compete in the ACA World Championship 2021 which is set to take place later in the year. One TAR UC student first won the ACA Championship at national level and emerged first runner-up at the world championship in Florida, USA in 2016.

Apart from this achievement, this multi-talented TAR UC student has also recently captured attention with her motion graphic video titled “Carpenter Street”. The video is currently being exhibited virtually at the International Academic Contemporary Art and Design Exhibition organised by the School of Design, Bina Nusantara (‘Binus’) University in Indonesia.