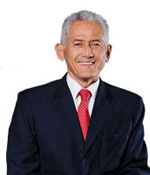 About UTP Vice Chancellor
Datuk Ir (Dr) Abdul Rahim Hashim has been appointed as the Vice Chancellor of Universiti Teknologi PETRONAS since 1 November 2012. Abdul Rahim graduated in Electronics and Electrical Engineering from University of Birmingham, UK in 1976 and later received an Honorary Doctorate in Engineering from the same university. As a professional engineer, he was previously the Chairman of the Engineering Accreditation Council, Malaysia and sat in the Board of Engineers Malaysia. Abdul Rahim reported duty in PETRONAS in September 1976, and his last position was the Vice President of Research and Technology Division from 2006 – 2008. Prior to that, Abdul Rahim was the Vice President of Gas Business (2002 – 2006), Vice President of Human Resource Management (1998 – 2002) and CEO of PETRONAS Penapisan Melaka (1991 – 1998). Abdul Rahim is currently the President of the Malaysian Gas Association, President of Asia-Pacific Natural Gas Vehicle Association, immediate past-president of the International Gas Union from 2012 to 2015. He is also an associate member of the American Institute of Chemical Engineers, Commissioner of the Energy Commission, Malaysia and a member of the National Science & Research Council, Malaysia.