So you wanna be a Pilot

Did you know...? KLM is the world's oldest airline, established in 1919, and Qantas the second-oldest (1920). Also, pilots and co-pilots are required to eat different meals in case of food poisoning. And, the maximum speed of a Boeing 747 is 955 km/h! If flying and excitement is take you to cloud nine and you're not intimidated by the responsibility, why not consider a career as a pilot?

The Job of a Pilot 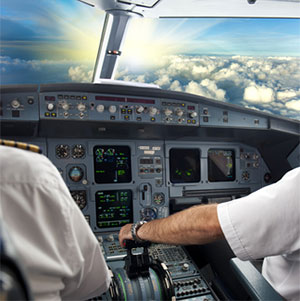 A pilot's job is to fly and navigate airplanes, helicopters, and other aircraft. Their duties include checking the overall condition of the aircraft before and after every flight; communicate with air traffic control over the aircraft's radio system; operate and control aircraft along planned routes and during takeoffs and landings; and monitor engines, fuel consumption, and other aircraft systems during flight.

In general, there are four categories of pilots:

Airline pilots – commercial pilots who work primarily for airlines that transport passengers and cargo on a fixed schedule to destinations around the world.

Corporate pilots – pilots who fly for companies with their own fleet of planes to transport passengers such as company executives.

Flight instructors – commercial pilots who use simulators and dual-controlled aircraft to teach students how to fly.

Is this Job for You?

If you're considering a career as a pilot, you'll need to have good teamwork skills, good concentration and hand-to-eye coordination. You'll also need to be able to remain calm when dealing with challenging weather conditions.

The interest code for this career is RIE (Realistic, Investigative and Enterprising):

Realistic — Realistic occupations frequently involve work activities that include practical, hands-on problems and solutions. They often deal with plants, animals, and real-world materials like wood, tools, and machinery. Many of the occupations require working outside, and do not involve a lot of paperwork or working closely with others.

To become an airline pilot, you will need to be able to follow spoken instructions from air traffic control and give clear, confident instructions to crew members and passengers. Teamwork skills is important, as well as good written communication skills. You must be comfortable working with technology and be able to read maps and 3D displays. The ability to remain calm when dealing with challenging situations such as changing weather conditions, is imperative.

Pilots value independence in working on their own. Support from the management is also important to them as well as recognition for a job well done.

Pilots flying across time zones need to cope with fatigue and jetlag. Flights can be long and flight decks are often sealed, so pilots must be able to work in small teams for long periods in close proximity to one another.

Working hours for pilots are strictly regulated for safety reasons but they would need to work non-standard hours including nights, weekends and public holidays.

Whether you want to fly a small aircraft during the weekends, or a Boeing 737 for a passenger airline, the process that leads to becoming a qualified pilot is like a step ladder. You start initially by becoming a private pilot, then a commercial pilot, and finally an airline transport pilot. Lastly, you have the option to become a commercial pilot.

Private Pilot License (PPL) — you can fly throughout Malaysia and carry non-paying passengers; you are not allowed to charge for your services.

Commercial Pilot License (CPL) or an Airline Transport Pilot License (ATPL) — you can work as a pilot commercially, fly large aircraft and earn an attractive salary.

To obtain a pilot's license, the candidate needs to pass a medical examination – class 2 for a PPL and class 1 for CPL.

For more information, read this useful guide by Department of Civil Aviation Malaysia (DCMA) on 'How to Become a Pilot'.

Here are some names of aviation flying training organisations in Malaysia:

What's life like as a pilot? Watch Nursyafiqah's story here.
Watch this! A montage of life as a student pilot at Asia Pacific Flight Training.

Sources of this article include: