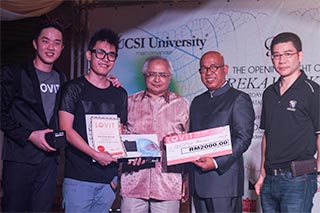 Officiated by Dato' Izuldin Hani, President of Kuala Lumpur Design Week, the event showcased a series of unique and creative artworks by emerging young artists and designers. Among the competitions and activities held were the Malaysia Footwear Design Competition Showcase and the LOVIT Tee Shirt Showcase.

Unique creations by the students of UCSI’s De Institute of Creative Arts and Design (ICAD) were also highlighted and recognised through the ICAD Young Fashion Designers Showcase. This also featured the creations by ICAD’s BA (Hons) Fashion Design with Marketing student, Lee Bao En who was the winner of the AirAsia Runway Ready Designer Search 2015. 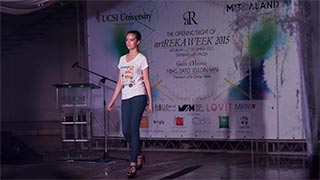 In his speech, Dato’ Izuldin said that the event was indeed a step in the right direction in nurturing artistic practices among youths.

“artREKA Week 2015 is an important avenue for us to hear and see – as well as be amazed – at what our young Malaysian students are capable of. I must commend UCSI for initiating and spearheading this event as you are one step closer in sharpening the minds of the younger generation and future leaders – through education,” he said.

“UCSI is putting its full support behind the arts,” said Senior Prof Dato’ Dr Khalid Yusoff, Vice-Chancellor and President of UCSI, in his speech.

He also announced that UCSI University Trust is offering the UCSI-ICAD Education Funds to those who are interested to study in ICAD. The fund will cover up to the full tuition fees for any diploma and degree programme for the 2016 intake. All Malaysian SPM and STPM leavers as well as those who are finishing their foundation studies are invited to apply for the fund.

“Through this boost, UCSI hopes that potential talents can take their artistic abilities beyond the ordinary and create art that is profound,” he added.

Fully sponsored by Mitraland Group, the event also included the artREKA Design Market that saw artists and designers sell handmade crafts, artworks and jewellery, among others.

Further information on the UCSI-ICAD Education Fund can be found on the University’s website at http:// http://www.ucsiuniversity.edu.my