What’s in a Sound? 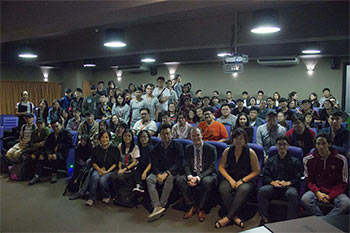 Recently, The One Academy hosted a sharing titled ‘Scoring & Sound Design in the Modern World’ by Kaiyun Wong, Executive Director of Music Administration at Sparks & Shadows and Alexandre Côté, Composer & Executive Producer at Somatone Interactive. Students were enlightened on the wonders of sound in this rare opportunity as the two speakers from Los Angeles, California, shared in detail about what goes on behind scoring and sound designing in Hollywood, as well as provided industrial knowledge and career advice. The audience listened in rapt attention as they were entertained with video clips that showed best the use and importance of sound and music in film and games.

Both speakers are graduates of a prestigious music college in Boston, USA. Kaiyun is more involved in the executive, project management side where she coordinates, handles and manages things in the music production company she works at. Some of her notable work include the AAA video game God of War, films Happy Death Day, 10 Cloverfield Lane, and television series The Walking Dead, Agents of S.H.I.E.L.D. and Black Mirror. On the other hand, Alexandre does composition, sound design, and was previously involved in the film industry but is recently more centred to games. He has done audio contributions for The Nun, Penny Dreadful, and Nocturnal Animals, just to name a few.

Enthusiastic students thronged the venue as the sharing’s topic of sound and music is relevant to their studies such as Advertising, Digital Animation & Game Development, Visual Effects and Digital Media Design. As technology advances, so does consumers’ expectations. In this digital age where animated actions make for a more interesting content, it is no longer enough to look amazing, but to sound equally wonderful as well. A great combination of visual and sound heightens user experience and delivers the intended impact. 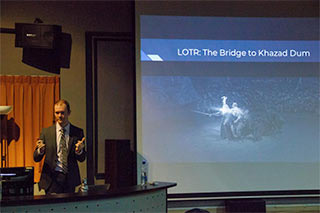 Both speakers talked about the workflow in the industry to give students a picture of what it means so that when they step into the working world in their various fields, they will be prepared to face the challenges. They gave detailed explanation on what is scoring, what is sound design, industry workflow, audio team members, possible pitfalls and examples of successful scoring. They also demonstrated sound designing by using MIDI (Musical Instrument Digital Interface) – the language in the computer that allows to translate a musical note to something readable on screen.

Scoring is the art of applying audio to visuals to elicit a particular emotional response from the audience. Musical score can amplify emotion on screen, highlight underlying or unspoken emotion, ‘Mickey Mousing’ or mimic the action exactly, establish the setting or time period, and showcase a character’s psychology or thoughts. The music has to sync with the action or scene, or else it will not make sense or deliver the intended feeling or emotion.

Sound design is the application of non-musical audio to picture. It is used for dramatic effect, emphasis of on-screen sounds, VFX, replacing location sound, and for animation where there is no sound at all, thus sound has to be created. Foley is the reproduction of everyday sound effects that can be made with household objects and are added to enhance the auditory experience and create a sense of reality. Dry ice is a huge favourite of sound designers when it reacts with metal.

The scoring cycle in music consists of firstly securing the gig, pre-production/spotting, composition, reviews, revisions, booking session dates and securing musicians, orchestration, copying, engineering, mixing, mastering and finally, dubbing. Dubbing is the final process when all the sound and music have been completed with the dialog and put together and a final mixing is done to adjust the volume levels to make sure everything sits well in a theatre setting. 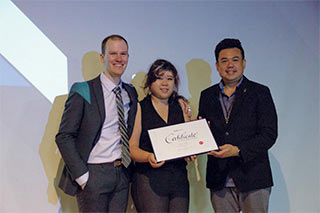 Kaiyun showed an impressive scoring process video of The Cloverfield Paradox – a project she and composer Bear McCreary had worked on with J.J. Abrams, an Emmy Award-winning American film director, producer, screenwriter, actor and composer. The recording took place at the Barbra Streisand Scoring Stage – one of the largest motion picture scoring venues in the world. Alex also showed a clip of TARGET’d, a short film project made for the Los Angeles 48 Hour Film Festival 2017 in which the original score was written, composed and performed by him within that time frame. It won Best Visual Effects and was the runner-up for Best Sound Design.

“No matter where you are in your career path, you should be humble about your work, and always be kind to others. This industry is incredibly volatile, so wherever you’re at, make the kind gestures that are genuine. Always remember that we’re all here to support each other in this crazy career path of entertainment,” advised Alexandre.

The One Academy is committed to providing the best art education programmes and continues to nurture its students passionately through its ‘Masters Train Masters’ coaching philosophy, which has been practised for the past 27 years, by providing diploma and degree courses namely Advertising & Graphic Design, Digital Animation, Digital Media Design, Film Visual Effects, Interior Architecture & Design, Illustration, Fine Arts and Paris Fashion Design & Pattern Making. For more information on The One Academy, visit www.toa.edu.my or call +603-5637 5510 or e-mail your enquiries to [email protected].