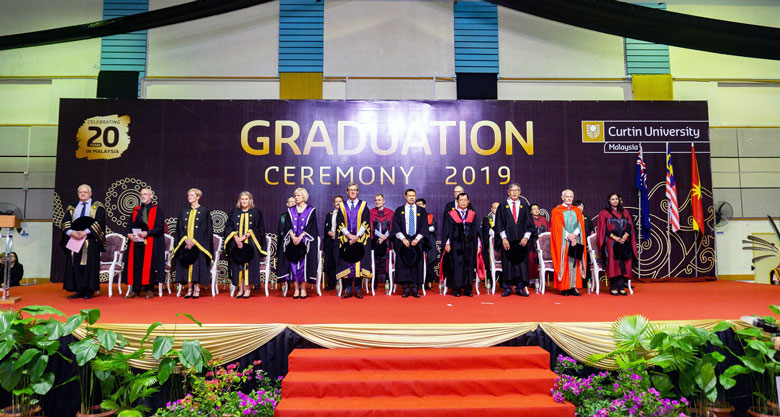 Miri – 3 May 2019 – Curtin students should be proud to graduate from a university that is increasingly making its mark on the global stage. As leaders of the future, they also should rise to the occasion and never underestimate their capacity to make a difference.

The 735 graduates from 26 different countries were from Curtin Malaysia’s Faculty of Business, Faculty of Humanities and Faculty of Engineering and Science. They represented its largest graduating cohort ever, marking a significant milestone in its 20-year history. 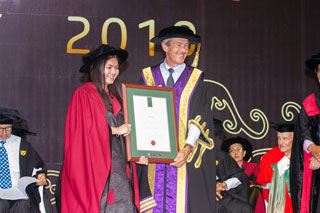 Professor Terry said Perth-based Curtin University’s recent achievements include rising rapidly in the major international rankings of universities to now being ranked in the top one per cent of universities worldwide, attracting industry support for a major new centre of excellence in artificial intelligence, and becoming a valued partner of edX, the global education platform established by MIT and Harvard University.

Curtin is also building on its new medical school to attract new research partnerships and clinical opportunities for its students, as well as strengthening its presence around the Indian Ocean Rim through new campuses in Dubai and Mauritius that complement its campuses in Malaysia and Singapore.

She said Curtin Malaysia is well on its way to achieving its core objectives: becoming a world-class campus with a reputation for first-class teaching, producing excellent graduates for Sarawak and the region, conducting high-quality research focused on local problems and opportunities, and becoming a major contributor to the region’s economic and social development.

“But most impressive of all is the more than 7,000 students who have graduated here since this campus was established. This is because the most tangible and most fulfilling indicator of our success is the quality and the achievements of our graduates,” she remarked. 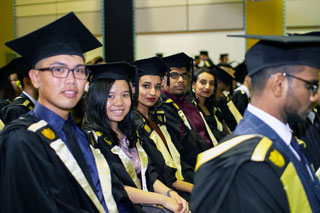 Professor Terry cited the examples of Curtin journalism graduate Michael Casey, who spent 18 years with the Wall Street Journal and is now a commentator, educator, and advisor to MIT on how new technologies are disrupting business models and radically changing careers and the way people live.

Another graduate, Dr. Tom Shannon, a science graduate, not only helps improve the lives of children with muscular dystrophy and cerebral palsy but also produces the impressively realistic effects used in box office blockbusters like the Star Wars and the Paddington Bear movies.

She said Curtin’s graduates in Malaysia have also had a huge impact. They include Navakanesh Batmanathan, who graduated with a Masters degree in applied geology and is now a National Geographic Young Explorer and earthquake geologist who has been using satellite imagery and field investigation to understand the faults that generate earthquakes in the region.

“These examples reflect so clearly the power of universities to transform the lives of individuals, families and whole communities,” said Professor Terry, adding that she hoped the graduates would leave the university feeling that their aspirations, skills and capabilities have been shaped by their university experience. 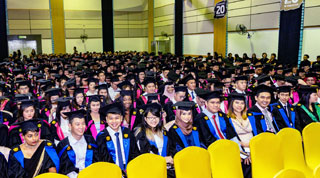 “You should be proud of your achievement, and as you make your way out of university life, know that you are in esteemed company, joining over 230,000 Curtin graduates from 170 different countries,” she concluded.

18 students from the Faculty of Humanities received Bachelor of Arts degrees in mass communication while 21 students received Master of Science degrees in project management. 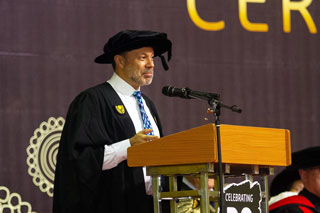 Two separate ceremonies were held - a combined ceremony for graduating students of the Faculty of Business and Faculty of Humanities in the morning, and another for the Faculty of Engineering and Science in the afternoon.

Also attending was former Vice-Chancellor Emeritus Professor Dato Lance Twomey, who was in office 20 years ago and played a pivotal role in the establishment of the Malaysian campus.

Curtin Malaysia, established as a joint venture between Curtin University and the Sarawak state government and local stakeholders in 1999, is celebrating its 20th anniversary as Curtin University’s largest international campus and global hub in Asia this year.

In addition to the graduation ceremonies, the festivities over the past week included an anniversary staff gathering, a gala dinner with government and university leaders and local stakeholders, and an awards dinner with students and industry sponsors.