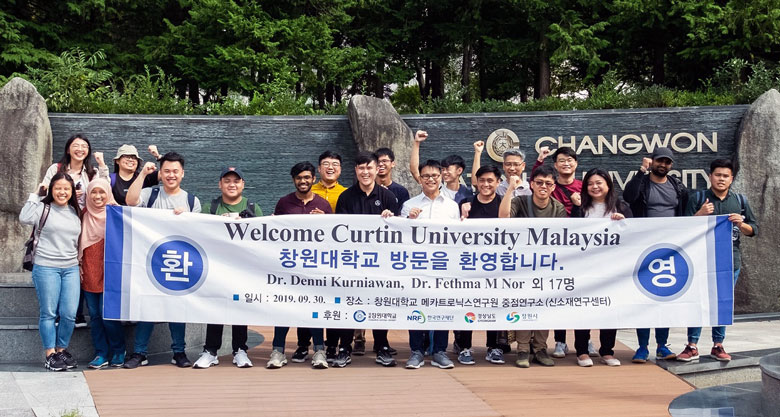 The group posing for group photo at Changwon National University.

Miri – 31 October 2019 – 16 students and three academics of the Department of Mechanical Engineering of the Faculty of Engineering and Science at Curtin University Malaysia (Curtin Malaysia) recently participated in the Curtin University Global Outreach Program which took them on a week-long study visit to South Korea.

The Global Outreach Program is aimed at providing students exposure to technologies, industrial practices and work cultures in foreign countries; teaching and learning environments in foreign universities; and cultural exchange between students and international communities; as well as opportunities for students to develop leadership, teamwork and communication skills. 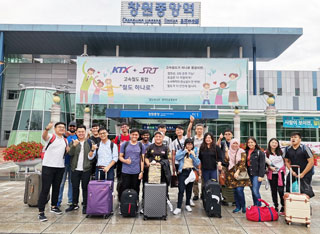 Whilst in South Korea, the group visited two universities, namely Changwon National University in Changwon and Dongguk University in Seoul, both of which Curtin Malaysia has signed Memorandums of Understanding (MoUs) for academic collaboration.

Senior lecturer in Mechanical Engineering and Chair of the Faculty of Engineering and Science’s Industrial and External Relations Committee, Ir. Dr. Lim Chye Ing, who was one of the accompanying academics, said the students gained a lot in terms of international exposure and broadening of perspectives, as well as knowledge and skills enhancement.

The other academics who made the trip were mechanical engineering lecturers Dr. Jung Hyung-chul and Dr. Fethma M. Nor. 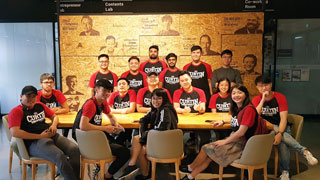 At LG Electronics, meanwhile, the group toured the company’s Research & Development Centre where they learned how it innovates and develops state-of-the-art electrical and electronic appliances.

At Dongguk University, a university based on Buddhism, the group toured parts of its campus, including its engineering research laboratories and iconic library which has unique architectural and engineering features. In addition, they attended an engineering class conducted in Korean, and engaged with student ambassadors of the university in a dialogue session.

One of the Curtin Malaysia students, Chia Yan Shi, remarked that the trip was highly educational as it gave him interesting insights into the student life and study culture in South Korea.

“Visiting Changwon National University and Dongguk University and seeing their campus facilities, as well as interacting with their students and staff, was a real eye-opener as their study environments are quite different from Curtin’s,” he said.

Chia said the visit to Volvo CE was also very enlightening, especially seeing the extensive use of automation in its assembly line and the company’s work culture which emphasises constant improvement and high achievement in productivity and sales. 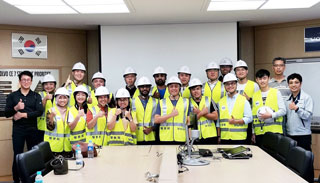 For fellow student Saran Raj Krishnan, travelling in a large group to a foreign country and bonding with his fellow students was an experience in itself. He said travelling in commuter and bullet trains to different locations throughout most of the trip, and exploring parts of Seoul, was also something he would never forget.

“Our visits to LG Electronics and Volvo CE were good as what we saw was very relevant to our studies in mechanical engineering. We learned a lot about their products and the operations of manufacturing plants in general,” said Saran.

Meanwhile, student Dominick Wong expressed gratitude for the opportunity to participate in the Global Outreach Program, which he said can be very beneficial to all Curtin students. He said the programme helped him broaden his perspectives of Korean culture and allowed him to draw interesting comparisons between university studies in South Korea and Malaysia.

“At Changwon National University, we visited their MAKERS AGIT which is very similar to our own Digital Makers Hub at Curtin Malaysia, and at Dongguk University, it was very fascinating to see how Buddhism is incorporated into its educational programmes.

“Overall, the trip showed me that there is a strong emphasis on community and culture in South Korean tertiary education, and universities there are working towards creating a highly adaptable, progressive and cultured society,” said Wong.

The group’s trip to South Korea was made possible with support from Curtin Malaysia and Royal Brunei Airlines.