“I would like to congratulate Professor Jeffrey Sachs on his recent appointment as an Honorary Distinguished Professor at Sunway University, in recognition of his global leadership in sustainable development, stellar academic achievements and immense dedication to the Jeffrey Sachs Center of Sustainable Development at Sunway University. I look forward to perpetuating our collective efforts towards advancing the sustainable development agenda in Malaysia and across Asia,” said Tan Sri Dr Jeffrey Cheah AO, Sunway Group Founder and Chairman, and Chancellor of Sunway University. 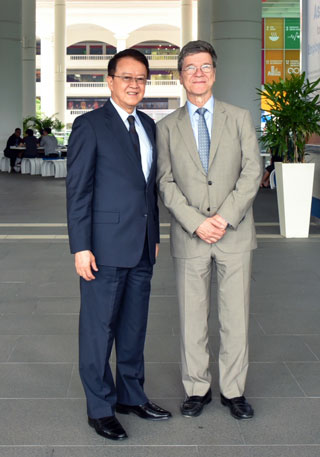 “I am absolutely delighted that Professor Jeffrey Sachs has been appointed as a distinguished honorary professor at Sunway University. He is arguably the most famous academic in his field who has dedicated his professional life to researching and campaigning for global sustainable development. He really understands the fragility of our existence on planet Earth and recognizes that a lot has to change in order for us to be able to sustain human civilization into the future. We are truly humbled and delighted that he has accepted this honorary position. Our entire academic community will benefit from his wisdom and he will provide outstanding guidance for our researchers and educators in the field of sustainable development”, said Professor Graeme Wilkinson, Vice-Chancellor of Sunway University.

Professor Jeffrey Sachs joins a list of distinguished professors at Sunway University, appointed to share their knowledge and expertise with academics and students as well as the public through lectures under the Jeffrey Cheah Distinguished Speakers Series, forums and conferences. Tan Sri Dr Jeffrey Cheah believes in collaborating with and learning from the best in their field of expertise.