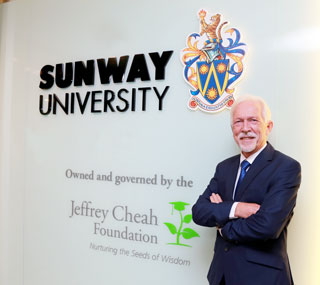 Sunway University has appointed renowned education transformationist and medical researcher, Professor Sibrandes Poppema as President of the University to drive the University’s vision to be a world-class university and to advance its mission to nurture all-round students and become the epicentre of discovery, advancement, transmission and application of knowledge the meets the needs of the society and the global community.

Among his greatest achievements were the merger of the Faculty of Medical Sciences and the Academic Hospital, transforming into the University Medical Centre Groningen and the establishment of Healthy Ageing as the main research focus for the Centre.

Professor Poppema studied medicine at the University of Groningen, where he also performed his PhD thesis on the Immunopathology of Hodgkin’s disease and trained as a pathologist. Following that, he had worked on his post-doctoral at the University of Kiel in Germany as well as at Harvard University in the United States.

In 1985, he was appointed as the J.K. de Cock Professor of Immunopathology at the University of Groningen. Over the years, he published over 240 articles on the topics relevant to Immunology, Haematology and Oncology, which were cited more than 18,000 times.

He was recently awarded the Officer’s Cross of the Order of Merit of the Federal Republic of Germany by the President, Frank-Walter Steinmeier. This is to recognise his efforts in promoting international cooperation on research and education between Germany and the Netherlands.

Professor Sibrandes Poppema was first introduced to Sunway University through Professor Peh Suat Cheng, whom he had supervised on her Doctor of Philosophy (PhD) studies at the University of Groningen many years back. He was invited to

deliver a public lecture on “Building a leading university: from regional roots to global significance” in the Jeffrey Cheah Distinguished Speakers Series in Sunway University in 2017.

Professor Poppema joined Sunway University in early 2019, as a Tan Sri Jeffrey Cheah Distinguished Professor, and advisor to the Chancellor especially on the establishment of the new medical school at Sunway University.

On his appointment, Professor Poppema said, “Together with Sunway Education Group CEO Dr Elizabeth Lee, Sunway University Vice-Chancellor Professor Graeme Wilkinson, and Provost Professor Peter Heard, and with the efforts of all staff and students, I hope to bring the University to achieve new heights in education, research, societal impact, entrepreneurship and internationalisation.”

Since joining Sunway University, Professor Poppema has helped develop a plan that enabled Sunway to obtain an exemption from the moratorium on medical schools.

“The new structure of the School of Medical and Life Sciences is an important vehicle for the development of the Sunway University Medical School. The curriculum will be developed by us together with the University of Cambridge, and will be science-focused, aiming to train physician scientists and specialists that can enhance the medical research profile in Malaysia,” he said.

The medical school will use the facilities of Sunway Medical Centre, to train medical students, house officers and specialists to help alleviate the capacity problem in medical training in Malaysia.

Sunway University’s ongoing collaborations in medical research include developing a Center for Global Health Delivery in Sunway with Harvard Medical School that will focus on Social Medicine and Global Health Delivery. In collaboration with other parties, the center will focus on communicable and non-communicable diseases prevalent in Malaysia and ASEAN. Sunway also established the ASEAN Microbiomics Centre with partners in Singapore.

With researchers in the Jeffrey Cheah Biomedical Institute in Cambridge and Sunway Medical Center, researchers at Sunway University is currently performing analysis of the viral sequences of COVID-19 patients in Malaysia and on the development of peptide-based vaccines for COVID-19.