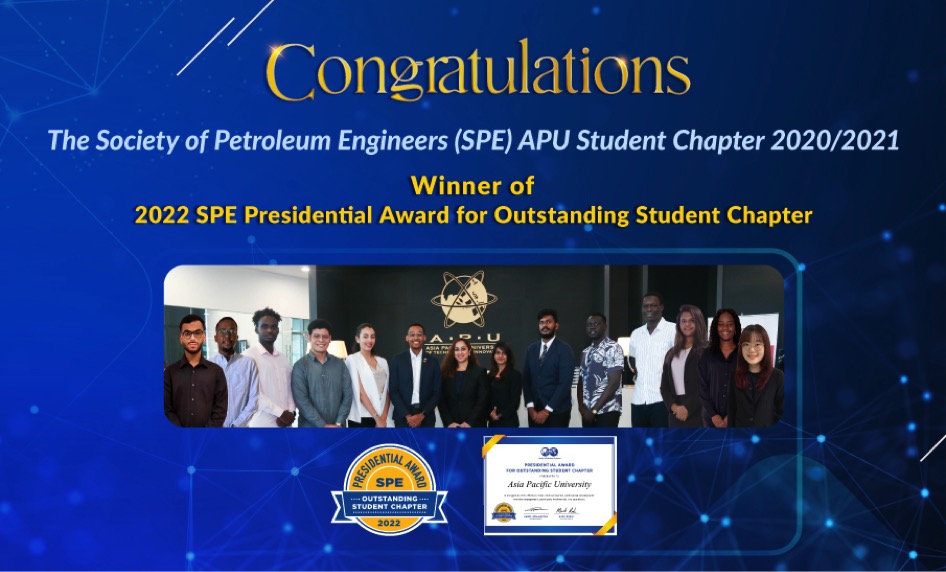 The Society of Petroleum Engineers (SPE) Student Chapter at Asia Pacific University of Technology & Innovation (APU), was accorded the 2022 Presidential Award for Outstanding Student Chapter along with counterparts from 16 universities across the world.

SPE President Kamel Ben-Naceur congratulated the APU Student Chapter which was recognised as the highest-ranked 5% of eligible chapters which stood out amongst nearly 400 student chapters in the world and emerged as one of the Best-17[1] whose programmes, activities, professional development, operations, community involvement, member engagement and levels of participation distinguished them from the rest.

A thrilled Abdallah El Badaoui, who led the SPE APU Student Chapter as the President for the term of 2020/2021, remarked, “I am very happy to have raised the bar higher with my team which made us amongst the best chapters in the world and amongst the only two Malaysian student chapters that won the same award this year.”

2021 has been a year of extreme growth for SPE APU Student Chapter, as they had organised and participated in 28 events compared to 14 in the previous year. This included a charity movement of raising relief funds for the flood victims last December and providing meals to the unprivileged during the Muslim fasting month. Besides, the president attended The 2021 SPE Annual Technical Conference and Exhibition (ATCE) held in Dubai; and had been selected for the International Petroleum Technology Conference (IPTC) 2022 in Riyadh, Kingdom of Saudi Arabia. 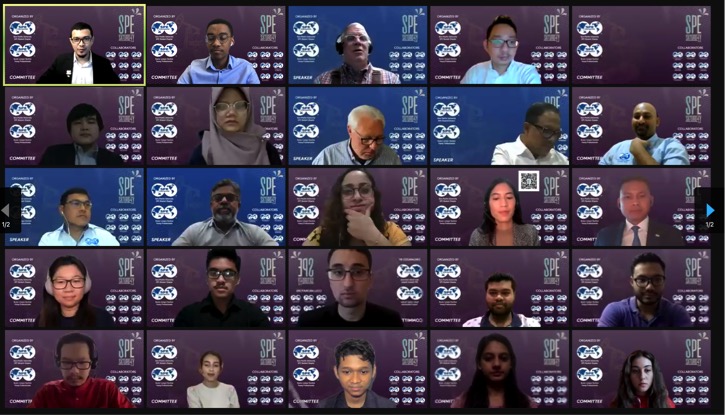 During the pandemic lockdown in 2021, SPE APU Student Chapter has rolled out its flagship event - Saturday for SPE (S4SPE), a series of fully online workshops and technical talks for its members. SPE APU Student Chapter has been actively playing a part in the social charity movement of raising relief funds for the flood victims.

On top of that, the team had dynamic interactions with chapters from around the world as well as industry players from the petroleum sector. For example, Saturday for SPE (S4SPE), a flagship event incepted in 2021, was a collaboration with eight student chapters from Indonesia, Nigeria, India, Oman, United Kingdom and two sections – Kuala Lumpur and the North Emirates.

“In this fully online event featuring 10 speakers in five workshops and five technical talks every Saturday in September 2021, we had recorded over a thousand views. Another first was achieved when two exercising SPE international presidents - Tom Blasingame and Kamel Bennaceur, were invited as the guests of honour for our opening and closing ceremonies respectively,” recalled Abdallah.

Affirming the above, SPE President Kamel Ben-Naceur stated, “This achievement would not be possible without the dedication of the officers. Thank you for volunteering your time to fulfil SPE’s mission by serving local members and furthering the advancement of the Society.”

SPE APU Student Chapter was established in February 2020, with the leadership passed on from Syed Oubee, Abdallah El Badaoui to Geerbasini Elangovan. They are either completed or currently pursuing a Bachelor of Petroleum Engineering with honours degree from APU. Their faculty advisor is Ts. Dr. Harvin Kaur Gurchran Singh and consulted by Programme Leader, Ms Nur Ailie Sofyaiana Serasa.

At SPE APU Student Chapter, every student-officer will have a chance to learn to organise an event, where there will be a strict structure for them to accomplish and connect the activities – from a proposal to a feedback session and to review what went wrong and what can be improved.

“When I took up the post, I had promised my programme leader Ms Nur Ailie and my faculty advisor Ts. Dr. Harvin that I would win this award before I graduate, and now, there is a sense of relief as my promise has been delivered. We operated for two years and had won two awards, so I hope the next generation of the chapter has somewhere to look up to and keep the legacy going,” concluded Abdallah who is currently in his final year of studies.

The Presidential Award for Outstanding Student Chapter recipients from all over the world will be officially recognised during the Student Awards Luncheon at the 2022 SPE ATCE, scheduled on 4 October 2022 in Houston, Texas, USA.

[1] The full list of the winners can be read here - https://www.spe.org/en/chapters/outstanding-student-chapter-award/