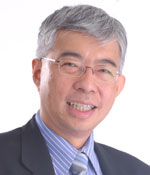 As President since 2009, Mr. Lim Tou Boon is responsible for the overall business strategies and academic operations at Taylor's College. Prior to this appointment, he held the position of Provost, Taylor's University College from 2007. In this position, he was directly accountable for all academic matters at the institution. His specific responsibilities include academic policy development, academic training and academic management to support the strategic goals and direction of the institution.

From 2001 through 2007, Mr. Lim served as the Registrar of Taylor's College, and was responsible for liaising with relevant government authorities with regards to applications for the approval and accreditation of courses. He was also in charge of agreements and collaborative arrangements with local and foreign institutions, and responsible for ensuring that all Taylor's policies were in accordance with the requirements of the college and the Malaysian Qualifications Agency. He concurrently held the position of Academic Director of Taylor's Business School & American Degree Transfer Program in 2006 and 2007. Mr. Lim joined Taylor's College in July 1998.

Key initiatives such as the Taylor's Graduate Capabilities and the Taylor's Teaching and Learning Framework took shape under his leadership. Mr. Lim is passionate about the Purpose of Taylor's, which is to educate the youth of the world to take their productive place as leaders in the global community. Towards this end, he is in constant engagement with the academic community at Taylor's and other key stakeholders on the transformative education that is needed in order to achieve this outcome.