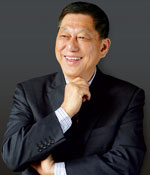 Datuk Dr. Chan has an interesting career as an academic, economic advisor, and entrepreneur.

He is Founder and President of HELP University (Malaysia), a highly respected international private university that manages more than 10,000 students in Malaysia and Asia. He is also Executive Director of HELP International Corporation which is listed on the Malaysian Stock Exchange.

An economist by training, he studied at the University of Malaya and McMaster University, Canada and completed his PhD at the Australian National University. Dr. Chan has a distinguished academic career. He was Chairman, Division of Applied Economics, University of Malaya. He has published widely, taught in many universities, and participated in numerous professional seminars.

He is also an Auditor of the Australian Universities Quality Agency.

For his contributions to education in Malaysia and Asia he received honorary doctoral degrees from British and Australian universities. He is also a member of the Distinguished Alumni Hall of Fame of the prestigious Australian National University in recognition of his achievements in education and entrepreneurship. Dr. Chan is President of the Malaysian ANU Alumni and Chairs the ANU Alumni Scholarship Committee.

As an economic advisor, he has acted as consultant for international organisations and governments. He has contributed significant policy inputs to various Malaysian government projects, including the Five Year Plans, the Industrial Master Plan. He was on the Panel of Economists advising the Prime Minister's Department (1986-1989). Dr. Chan assisted in constructing the KLSE Composite Index and was Chairman of the Committee during 1991-2001.

As an entrepreneur, he has been involved in different roles in the corporate sector. He has been director of public companies and has founded and managed several private enterprises