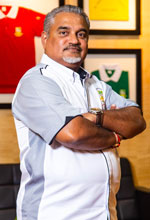 Suresh Dass is currently the Chief Operating Officer & Executive Principal of St. John’s International Primary & Secondary School, Kuala Lumpur. He has been involved in education for more than 30 years. He commenced his career in the government civil service as an English Language teacher. In 1989, he was awarded a scholarship by the London School of Legal Studies to read law in the UK. Upon completing his LL.B (Hons) from the University of Wolverhampton, he was seconded by the Ministry of Education to MARA to teach and coordinate the pre-university law programme. He left the civil service in 1996 to be part of a management team involved in the establishment of private institutions of Higher Education and collaboration with Universities in the UK, US and Australia. In 2006, he furthered his postgraduate studies and obtained his Masters in Educational Management from the University of Malaya. He has taught both on the undergraduate and master programmes for a few universities in the areas of comparative law, employment & contract law, organisational behaviour, intellectual property and management.

Since 2010, he is part of the management team involved in the successful establishment of SJIS including the recent SJIS campus 2 which commenced in January 2019. He is actively been involved in International Exhibitions & Summits in Education, especially in the International Private Schools Education Forum (IPSEF), where he has presented & shared his ideas on the concept of ‘Boutique Schools’ and ‘Schools of the 21st Century’. At the EduTech and Bett Asia Events & Conferences, he has presented & shared his ideas on international School facility management. He is also a member of the Malaysian Association of Facilitators.