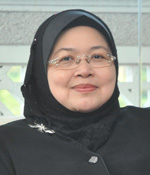 Prof. Dato' Dr. Zaleha Kamaruddin is a professor at Ahmad Ibrahim Kulliyyah of Laws (AIKOL), International Islamic University Malaysia (IIUM). She was appointed as the fifth Rector of IIUM on 2 August 2011 where she took over from Prof. Dato' Dr. Syed Arabi Idid whose tenure as rector ended on 1 June 2011.

Prof. Dato' Dr. Zaleha Kamaruddin was born in Raub, Pahang and educated at University of Malaya, graduating with a Bachelor of Law degree (with Honours) in 1985. Subsequently, she chambered and was called to the Malaysian Bar in 1986. She was the first batch of students for Master in Comparative Laws at the International Islamic University and later graduated in 1988. Subsequently, she continued her studies at the same university and graduated in 1989 with an Advanced Diploma in Shariah Law and Practice. In 1990, she proceeded to do her doctorate in Comparative Laws specialising in Comparative Family Laws (Civil and Shariah) at University of London and graduated in 1994. In 2000, she was promoted to Associate Professor and was made a full Professor at the AIKOL in 2006.

She has served the university for more than 25 years in various capacities. First, as Principal (Mudirah) of Sayyidatina Khadijah Residential College, and later as Deputy Dean of Student Affairs in 1994. In 2000, she was appointed as Deputy Dean of the Research Management Centre, and in 2003, became Dean of Centre for Postgraduate Studies. During her tenure, she participated actively and initiated academic links with top universities in the Middle-East and the West to ensure quality in postgraduate education. In 2005, she took sabbatical leave to head a major consultancy project on "Assessing Delays in Disposition of Matrimonial Cases in the Malaysian Shariah Courts" which provided a strong basis for the setting up of Family Support Authority (FSA). In 2010, the idea materialised into reality when the government gave a grant of RM15 million to the Malaysian Department of Shariah Judiciary to set up the FSA.

Internationally, she is a leading authority on comparative family laws and a well respected figure amongst the legal fraternity. She has been a member of the International Society of Family Law since 1994 and International Society for Prevention of Child Abuse and Neglect since 2000. She was invited to join the Law Association for Asia and the Pacific (LAWASIA) in 2007. She is listed in "Who's who" in law and religion by the International Consortium for Law and Religion Studies (ICLARS) based in Milan, Italy. As a prolific writer, she has published 17 books and has presented more than 200 papers for local and international conferences. She writes for Mingguan Malaysia, Berita Harian and monthly for STAR and has her own segment in Radio IKIM.FM entitled "Mahligai Kasih".

At the Federal level, she is a member of the Technical Committee on Shari'ah and Civil Laws, Department of Islamic Religious Affairs, Prime Minister's Department and serves as appointed member in the National Religious Council. She was appointed as a member of the Malaysian Investigating Tribunal Panel, Advocates and Solicitors' Disciplinary Board Committee. As an expert in Family Law, she was appointed by the Minister of Women, Family and Community Development to be a council member of the National Women Advisory Council and also the Technical Committee for the NAM Institute for the Empowerment of Women. In 2010, she was appointed to chair the Panel on Current Issues on Women and Islam, Department of Islamic Development. She was seconded for two years (2009-2011) as the Deputy Director-General of the Institute for Islamic Understanding Malaysia (IKIM) before her appointment as Rector on the 2nd of Ramadhan 1432. She was awarded DPMS and DIMP from the HRH Sultan of Selangor and HRH Sultan of Pahang respectively in 2007.