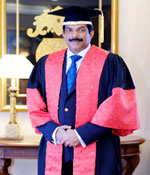 As an ardent fan of revolution, he advocates for ‘learn, unlearn and relearn’, told by Alvin Toffler.

Edmund Edward forayed into the education industry in the early 90s and founded the ALC College with a passion of providing an affordable education pathway to those striving to uplift themselves for a better future. Today, ALC rebranded as Peninsula College after PKT Logistics Group Sdn. Bhd. wholly adopted as their CSR arm.

Apart from serving as the Chief Executive for over 21 years and reforming the institution, currently, he also serves as the Director of Peninsula Higher Education Group while holding to his core of moulding achievers in academic who bathed with high moral values and stand out as employable graduates.

His passion for education and producing all-rounder graduates are highly admirable. Being a revolutionist, he is one of the first to practice the concept of a higher institution that focuses primarily on logistics and business majors within the corporate ground in Malaysia, by joining hands with the award-winning PKT Logistics Group Sdn. Bhd.

Besides, he has encouraged and educated the college community to contribute positively to our society through various goodwill projects, which not only allowed students to learn and groom beyond theories but also challenge themselves to unlock their skills. With this, students confidently explore their limitation and support many charitable organizations for more than 20 years, which earned them the first edition of the Sin Chew Education Award (CSR category).

As a ‘veteran’ who has been witnessing the transformations around the education field, Edward continues to collaborate with his college community, bringing the best for the youths, who will serve and develop our nation tomorrow.