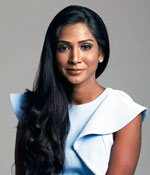 Anne Rajasaikaran currently helms Imperium International College as President and Chief Executive Officer, after the successful takeover of HELP College of Arts and Technology in March 2020.

With over 15 years of experience as a communications and fundraising executive with a track record of managing a public trust which has been around for 25 years, she also the Chief Executive Officer of Budimas Charitable Foundation, an NGO who cares for underprivileged children in Malaysia.

She was presented the 2019 Women Icons Malaysia award at a glittering ceremony hosted in the city on March 28, 2019 and was among a total of 18 Women Achievers from Malaysia representing a diverse category of professions & sectors who were recognised at the 2nd edition of the Women Icons Malaysia Summit & Awards. The event is part of a continuing initiative to create a regional platform under the aegis of the Women Icons Network to recognize women achievers & leaders across South & South East Asia.

Anne Rajasaikaran holds a Master of Business Administrative (MBA) from University of Strathclyde where she wrote her dissertation on the controversial issue of Asian NGO’s in comparision with Malaysian NGO’s. As being in the NGO circle for about 10 years has definitely raised some questions and queries on matters relating to a charitable foundation’s finances and governance matters. Anne graduated from University Tun Razak and holds a Bachelor of Communication Public Relations.