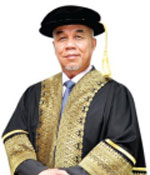 Among the prominent posts that he has held during his service in the Army were; the Commandant of Institute of Engineering of the Army, the Director of the Corp of the Electrical and Mechanical Engineers, The Director of Equipment Procurement at the Army Headquarters and the Head of the Electrical Mechanical Engineers Group at the Army Logistic Headquarters taking charge of the maintenance of the Malaysian Army fleet of equipment.

Prof Shohaimi was called to provide his service at the National Defence University Malaysia (“UPNM”) in August 2008 as a senior lecturer at the Faculty of Engineering. He shines in his new post with numerous research projects especially in the field of defence technology. He has published numerous research papers in high index journals in the area of defence engineering. Prof Shohaimi was promoted to the grade of a full Professor on January 2012. He was also appointed to head the UPNM Institute of Executive Studies (“NIEEd”), a business branch of the UPNM, with the title of Assistant Vice Chancellor, to provide for executive courses for military officers and rank and files. Prof Shohaimi was later appointed as the Dean of the Centre of Post Graduate Studies prior to leaving UPNM in 2016.

While in UPNM and after leaving the institution, Prof Shohaimi has served various other higher education institutions as follow: