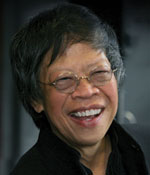 He was 29 when he set up his first business — Wings Creativity Consultants — in 1975. It was a bold move because he was muscling into an industry controlled by expatriates and multi-nationals. His perseverance, talent and skills, within a short time catapulted his business to the top rung. He was wooed by an international network and his enterprise grew to become a global business through a merger with the third largest communication network in the world. He broke away to form his own integrated communications organisation that created a name for itself for outstanding work.

He is one Asia's most well-known communications strategists. He built his campaigns on meaningful messages. Companies, government and humanitarian organisations sourced in one man a strategist who was not only highly creative but one who was able to move people, change mindsets, touch the hearts of people and shape opinions. He worked closely with the Malaysian government delving into cause marketing and relationship building. His abilities made him the perfect person to help South Africa as the country prepared for its first democratic election.

He is driven by a concern for the next generation and his emphasis on creativity as a competitive edge is now receiving its due recognition after more than a decade of championing its value to business and life.He changed mindsets helping people to grasp the elusive concept of creativity and thus enabled young people to convince their parents of building careers in creative professions. He brought the world into the classroom through smart partnerships with some of the world's most established and reputable universities and colleges. He is well respected in the international academic community as a trendsetter who is helping to evolve education to new levels.

He takes a special interest in the next generation, making time for them despite his hectic work schedule. He sees in them the future of the country and gives importance to their training, grooming them to become leaders. The students of his University find inspiration in his words and many have developed into exemplary young people able to multi-task. As a result, he has a corps of young executives who have taken charge of the University's marketing as well as creative content development for industry.

Being a creative person he has always looked for novel ways to make learning more meaningful to the student. He has taken the non-traditional approach and in the process brought fresh new thinking to the educational process. He set up incubation units to develop new businesses that are natural extensions to the University's programmes. Students are then able to apply their skills in practical ways and, in the process, pick up entrepreneurial capabilities, as these businesses will be franchised to interested students.