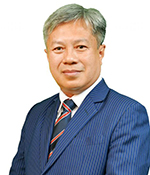 Professor Dato’ Dr. Mazliham went to Europe at the age of 19. He attended the Université de Montpellier 2 – Sciences et Techniques du Languedoc, in Montpellier, France. There, he earned his diploma in 1989, his Bachelor of Science (Hons) in Electronics, Electrotechniques and Automation in 1991, his Master of Science in Electronics, Electrotechniques and Automation in 1992, and his Post Master Degree in Electronics in 1993. In 2008, he earned his Ph.D. in Computer Engineering from the Université de La Rochelle, France, accomplishing the Very Honourable Class of achievement.

He began his career with a one-year-plus stint as an engineer with SGS Thompson Microelectronics, before joining the Malaysia France Institute in 1996 as the Deputy Head of Department (Electrical Equipment and Installation). In 2013, he was appointed the President and CEO of Universiti Kuala Lumpur (UniKL). In recognition of his outstanding leadership and capabilities, he was selected to lead MMU as President and CEO, effective August 2020.

He has served on numerous postgraduate examination committees, as well as supervised PhD and Masters students in the area of Artificial Intelligence, especially in Machine Learning and Deep Learning with different application areas such as Medical Image Processing for early detection of Brain Tumour and Breast Cancer, Remote Sensing techniques in Smart Agriculture, Green IoT, improving efficiency in Power Grid, efficient load balancing in Software Defined Network, etc. Apart from that, he also worked on Data Filtering and Data Classification and has lead research teams based in Malaysia, Bahrain, Kuwait, Pakistan, UAE, France and Saudi Arabia. His various research groups have published more than 100 research articles in Scopus-indexed journals, book chapters and well reputed conferences.