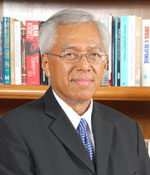 Professor Emeritus Tan Sri Anuwar Ali is one of the leading figures in Malaysian academia. He is currently the President/Vice-Chancellor of Open University Malaysia (OUM) and Chief Executive Officer of Multimedia Technology Enhancement Operations Sdn Bhd (METEOR), the holding company of OUM. Prior to joining OUM, he was the Director of the Higher Education Department at the Ministry of Higher Education (1995-1998) and later, moved on to become the Vice-Chancellor of Universiti Kebangsaan Malaysia (UKM).

Professor Emeritus Tan Sri Anuwar began his career as an Assistant Director at the then Ministry of Trade and Industry in 1970. Three years later, he joined UKM as a tutor at the Faculty of Economics. His career with UKM spanned over 30 years where he held various posts including the Dean of the Faculty of Economics and Deputy Vice-Chancellor before his appointment as the Director of Higher Education.

During his tenure as the Vice-Chancellor of UKM, he strived to uplift the status of the university to where it is now – a world-class institution. He was actively involved in research and publications particularly in the field of industrial and technological development. In recognition of his expertise, he was appointed as a consultant to prepare the Industrial Master Plan (1986-1995), Action Plan for Technology Development and the Action Plan for Small and Medium Scale Industries for the Malaysian government. He was also the Chairman of the Malaysian Examination Council, member of the Securities Commission and board member of SIRIM Training Services Sdn Bhd.

Professor Emeritus Tan Sri Anuwar was born in Jasin, Melaka, on 11 July 1946. He received his primary education in Tanjung Malim, Perak, and Jasin, Melaka, before joining the Melaka High School. He graduated with a BSc (Economics) degree from the Queen's University in Belfast, Northern Ireland, in 1970. During his early years as a tutor and lecturer at UKM, he furthered his studies and obtained his masters and PhD from the University of Leicester and University of Kent, Canterbury, United Kingdom.