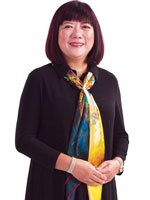 Ms. Hew Moi Lan was appointed to the Board of Directors in 2010 and is a member of the Risk Management Committee and Executive Committee of the company. She became the Group CEO in 2009 and assumed her responsibilities in 2012. Prior to that, she was the Vice President of Operations and the Principal of SEGi College Kuala Lumpur, one of the core subsidiary companies of the Group.

With almost 34 years of being part of SEGi University & Colleges since 1986, Ms. Hew Moi Lan has a deep attachment and love for one of the most established institutions of higher learning in Malaysia. Her mission is to ensure SEGi University continues to grow from strength to strength and each of its students succeed in achieving their study goals and dream careers. She is guided by strong core values – transparency, accountability, and truth, on her daily dealings and operations.

Throughout her service to SEGi University & Colleges, Ms. Hew Moi Lan has brought an immense wealth of experience and knowledge into the running of the Group. She strongly believes that education is integral in a person’s life as it affects his/her future and providing a solid education and opportunities to the future generation who will one day become leaders of the country is one of her greatest contributions to the education industry and to her beloved institution. She is committed to grooming the next generation towards the right educational path and achieving their dreams as well as answering their family’s need for a better life. In addition, Ms. Hew also believes that each student’s success is important to the development and success of the country by ensuring that they graduate with the relevant industry skills needed by the country.