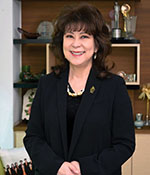 Professor Elizabeth Lee Fuh Yen is Chief Executive Officer of the Sunway Education Group (SEG). Under her leadership since 1992, SEG has developed from just one institution into a dynamic group of 17 institutions, including Sunway University, Sunway College and Sunway International School. Currently empowering over 30,000 students, SEG is home to learners and researchers from over 90 countries globally.

A Malaysian education industry veteran, Elizabeth has been at the forefront of education innovation, leading SEG to achieve many firsts, including setting up the first branch campus and championing dual degrees. More recently, she’s been instrumental in the setting up of 42KL, a project-based coding school with no teacher, no entry requirement and no tuition fee.

An educator at heart who immerses herself to students’ wellbeing, Elizabeth is the driving force behind SEG’s mission to provide a holistic and inclusive learning environment for all. She also leads SEG in its commitment in inculcating and contributing towards achieving the United Nations Sustainable Development Goals.

Beyond her role with the SEG, Elizabeth sits on the Board of Trustees of MERCY Malaysia and the Trustee Committee of the Chair on Women Leadership at the National University of Malaysia (UKM). She is also a member of the Malaysian Qualifications Agency (MQA) Council and her views are often sought by education policy-makers.

As a thought leader, her international engagements have included speaking at the Harvard Business School, University of Cambridge, University of Oxford and the University of Edinburgh. An advocate for women in leadership, Elizabeth serves as a mentor in the Institute of Chartered Accountants in England and Wales (ICAEW) global programme for specially chosen female corporate leaders. She is also a recipient of several international and national awards which include the Visionary Women Leadership Award at the 2nd World Women Leadership Congress and Award (WWLCA), Women Entrepreneur in Canadian Education, the Malaysian Chinese Women of Excellence Award in Education and Educationist of the Year at the Sin Chew Education Awards 2019.