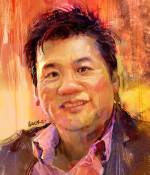 Founder & Principal
The One Academy of Communication Design (TOA)

Tatsun Hoi is a creative strategist and entrepreneur who is also the Founder and Principal of The One Academy, one of the world’s best creative art & design institutes. Besides that, he is also the Founder and Managing Director of The One Group, comprising The One Academy, One Creative Development Centre, Tatsun Studio and Tatsun Integrated. For over 28 years in the creative industry to date, Tatsun has been a well-acclaimed educator, renowned for his consistency in heightening creative education in Malaysia. During the decade prior to founding The One Academy in 1991, he felt that there is a lack of talent as well as substandard level of training in the communication design industry. He wanted to prove wrong the misguided belief that ‘creativity cannot be taught’.

In recognition of this outstanding contribution in the creative industry, Tatsun was awarded the Outstanding Young Malaysian Award and Asia Young Chinese Entrepreneur Award. He had also served as Beijing's Olympic Games Creative Multimedia Consultant and President of the Young Entrepreneurs Association of Malaysia (PUMM). His renowned leading example has led The One Academy to be awarded The BrandLaureate Awards 2008, 2009 & 2010 - Best Brand in Education Creative Communication Art & Design.

Throughout his career, Tatsun has not been just a role model who has demonstrated exemplary leadership but is also actively involved in community projects. One of his most recognisable efforts is the Malaysian Unity Campaign which he initiated back in 1997 when the country was rocked by internal and external threats during the economic crisis. He created a campaign to remind all Malaysians to stay united in order to overcome all impending threats. The animation was aired over NTV7 and RTM for 6 months.

At the age of 29, Tatsun became the youngest principal among all colleges in Malaysian education industry when he founded The One Academy together with prominent creative consultant, the late Veronica Ho. It’s his mission to make Malaysia the creative and educational centre of excellence since the college’s establishment, having successfully imparted his knowledge and expertise to over tens of thousands of students through practical, result-driven professional syllabus.

He imparts his wisdom to prepare students to know all about strategic practical applications of creativity in the global market. To date, the graduates are now among the best creative leaders working for the best names such as Pixar Animation Studios, Ubisoft, Lucasfilm, Tau Films, Leo Burnett, TBWA, Ogilvy & Mather, Grey Worldwide and many more. The art and design industry has greatly benefited from the teaching philosophy he initiated – ‘Masters Train Masters’.

As part of his commitment to produce industry-ready talents, various top-notch professional masters were engaged by The One Academy to give lectures to the students. Among those who shared their insightful knowledge and experience were Oscar-winning production designer of Star Wars, animation director, story artist, character designer and animator from Pixar Animation Studios, animation master of The Lord of the Rings and Harry Potter and the Sorcerer’s Stone, world’s top game developer Ubisoft, and leading creative marketing gurus from renowned advertising agencies.

One way in which he advocates the opportunity for creative young talents to pursue creative education is through the Malaysia Top 10 Outstanding Young Artists Awards. Currently in its 22nd year, this art competition brings out the best and most talented young artists and nurtures them to help lead them to success. To date, it has given out more than RM16.8 million worth of scholarships to deserving talented individuals all over Malaysia.

From being a creative whiz in communication art, a successful entrepreneur as well as a leading business strategist, his passion in sharing expertise and experience has made a strong presence in both the entrepreneurial and the educational arenas. His self-made success story has inspired many and is keenly featured in various media.

Today, The One Academy’s achievements under Tatsun’s leadership have garnered international recognition. The institute has fostered educational partnership with prestigious universities and institutions in the US, UK, New Zealand and Australia to provide opportunities for students to continue their learning journey abroad.