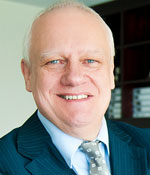 An Australian national, Professor Jim Mienczakowski joined Curtin Sarawak in July 2013. In his prior position, he served as Executive Director of Higher Education and Vice Chancellor of Emirates College for the Advancement of Education, Abu Dhabi in the United Arab Emirates (UAE).

Professor Mienczakowski has a Bachelor of Education degree from University of London’s Institute of Education, a Master of Arts from King's College, London, and a PhD from Griffith University, Queensland, Australia. He also has a Dip CSSD from London University’s Central School where he studied in the early 1970s.

With a strong background in education, having taught in Australia, the UK and the West Indies, his teaching and research interests reflect a broad and interdisciplinary approach to research. Having published extensively in the areas of qualitative research theory and methodologies, social sciences, ethnography, health education, schooling and performance, his published works also include a number of ethnographically informed theatrical plays. Professor Mienczakowski is on the editorial and advisory boards of a number of journals including Sage’s Qualitative Research.

Professor Mienczakowski leads a team of over 300 staff members (with a current enrolment of about 3,500 students from over 40 countries) in order to take the highly-acclaimed Curtin Sarawak campus to the next level.

His focus will be to capitalise on the significant and excellent work already achieved in Curtin Sarawak by his predecessors and to further internationalise both Curtin Sarawak’s identity and its student intakes. Curtin Sarawak’s strong emphasis on providing student focussed learning and supporting students throughout their programmes and early careers are elements of university life he is keen to develop further.

Growth of Curtin Sarawak’s national and international research capacities and achievements will also play a big part in his plans for the Miri campus but so too will enhancing the total student experience, providing students with richly interactive and personalised learning experiences, effective new teaching and engagement approaches and equipping them with leadership skills for the future. In addition, through high-impact research in areas of strategic importance, Curtin Sarawak seeks to deliver outcomes of significant value to the local and regional communities.

“Being recognised and respected as leading in research and education is very much part of Curtin’s global mission. Curtin Sarawak must also contribute to that recognition and to the rich and diverse fabric of Malaysia’s rapidly developing higher education environment,” he said.