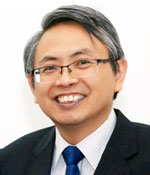 He had worked before in Motorola Penang, Intel Penang, MIT’s Research Laboratory for Electronics, University of Malaya and Multimedia University (MMU) where his last position held in MMU was Vice President (Academic). He was Vice President (Internationalisation and Academic Development) of Universiti Tunku Abdul Rahman (UTAR) from July 2009 to August 2019. He is currently the President/CEO of UTAR and also a Senior Professor of Lee Kong Chian Faculty of Engineering and Science of UTAR. He was also the recipient of a number of awards including The Young Scientist Award of URSI (International Union of Radio Science) in 1996, The Outstanding Young Malaysian Award 2005 for Academic Leadership and Accomplishment, and The Toray Science and Technology Award by Malaysian Toray Science Foundation in 2011. He is currently an Educational Counsellor and Regional Chair (Malaysia) of MIT Educational Council, Secretary General and Fellow of ASEAN Academy of Engineering and Technology (AAET), Fellow of Academy of Sciences Malaysia (ASM), former Council Member of Malaysian Qualifications Agency (MQA) from 2013-2018, Advisory Judge of Asia Pacific ICT Alliance Awards and also Vice President of MIT Club of Malaysia.

In publication, he has published in books, international journals and conferences and newspaper column articles. His research interests include microwave remote sensing, satellite image processing, wireless sensor network and intelligent computing. He is also active in consultancy and technopreneur development works and was a consultant/advisor for several listed and startup companies in Malaysia.