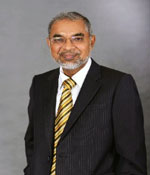 Professor Dato’ Dr. Ansary Ahmed, is a very successful Malaysian academic entrepreneur. He is the Founder President of the Asia e University (AeU), a collaborative multinational university initiated by the Asian Cooperative Dialogue.

Professor Dato’ Dr. Ansary has served in numerous national and international level committees. Internationally, Prof. Dato’ Dr. Ansary was a member of UNESCO Kornberg 21 st Century Visionaries for Higher Education and served as UNESCO Technical Consultant. He has represented Malaysia as a member of Board of Trustees ASEAN University Network for several years and has from time to time acted as International e learning consultant with Booz Allen Hamilton. He was the Project Director for Total e learning Solution, Ministry of Higher Education, Kingdom of Saudi Arabia, and has served as Honorary Advisor for Asia under the Commonwealth of Learning, Vancouver, Canada for several years. Currently, he has been elected into the Executive Committee of the International Council for Distance Education based in Norway. He is also an Executive member of the Asian Cooperative Dialogue (ACD) University Network and Global Advisor for Santa Barbara Leadership Centre. USA.

At the national level, Prof Dato’ Dr. Ansary has been actively involved as a Steering committee member of National Biotechnology Group, and as Special Science Officer at the Science Advisor Office, Prime Minister’s Department. He also served as member of Task Force National Technology at Mapping Project, National Innovation System and Headed the Pharmaceutical Secretariat at Malaysian Industry Government Group for High Technology (MIGHT) in Prime Ministers’ Department. Prof Dato’ Dr Ansary also served on the Science Council of the Malaysian Agriculture Development Institute Malaysia (MARDI) for several years. He had also served as a Project leader for Evaluation of Intensification of Research Priority Areas under the Malaysian Academy of Sciences, as a Member on Study on Post-Industrial Master Plan; Malaysian Institute of Economic Research (MIER)..

Prof. Dato’ Dr. Ansary has served as Chairman and member of several national level task forces and committees in Ministry of Higher Education. He was National Chairman for Internationalisation, National Chairman for e learning critical agenda project, and currently serves as a member of National Life Long Learning Council. He is a long serving member of Asian Institute of Charted Banker Education Committee and served as a Task Force Member for the establishment of the Asian Banking School, and is presently member of the Transformation of the banking sector, under the auspices of Central Bank Malaysia. He is currently active serving member of State Religious and Malays Customs Council (JAIPK) under the Sultan of Perak, Malaysia and he has served as the Chairman of the Audit Committee and serves as member in the Risk Management and Education Transformation Committees of the Religious Council. He has been serving as Committee Member for Leadership Development under the Razak School of Government, under the Head of Civil Service, Malaysia. He has also been the Education Ambassador for the Ministry of Tourism He has recently been appointed as an executive committee member of the British Malaysian Chamber of Commerce Higher Education Committee.

Professor Dato’ Dr. Ansary received his PhD from the University of Manchester, United Kingdom specializing in Molecular Biology. He started his academic career as a tutor at the Department of Genetics and Cellular Biology, University of Malaya in 1979. He was promoted to full Professor in 1994 and was the Founder Dean of Institute of Graduate Studies until 2002. Upon taking optional retirement he was appointed the Senior Vice President and became the Co-founder of Open University Malaysia.

Professor Dato’ Dr. Ansary was the recipient of the Most Promising Entrepreneur by Enterprise Asia in 2010 in recognition of AeU’s great success as a Startup. He was awarded Honorary Associate Fellow of Institute of Bankers Malaysia by Central Bank Malaysia for his long service in 2012. In recognition of his vast contributions to e education he was ASEAN Master class leader in e education development (2018) and is the FIRST recipient of the National e learning Maestro Award (2018). Most recently, Prof Dato’ Ansary was conferred an Honorary Doctorate in Education by Siam University, Thailand (2020).

He was conferred the Darjah Johan Negeri from the State of Penang Governor in 2005, and in 2007 the Darjah Paduka Mahkota Perak from His Royal Highness Sultan of Perak, which carries the title Dato’.