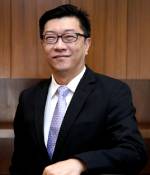 Dr See comes with 20 years of work experience in the education industry, and with more than 10 years at the senior management level, in various educational institutions. He had ventured into management and administration of schools/colleges very early in his career. His appointment as Principal of a prestigious Chinese Independent School, at the age of 31 made him the youngest Principal.

Prior to joining BERJAYA University College, Dr See was the Principal to several colleges and as Vice-President to a university. It was during his tenure that one of the colleges had been upgraded to University College status under his leadership. He was also instrumental in setting up a new college and a private school and the first Confucius Institute, in a Private University in Malaysia.

Although his daily duties are basically administrative in nature, he has not given up on research and upgrading himself. He earned both his Master of Philosophy from the University of Malaya and the Doctor of Philosophy degrees from International Islamic University, Malaysia, as a part-time student for a total of 8 years. Prior to that, he completed his LLB (Hons) from University of Glamorgan, UK (now known as University of South Wales).

He has published numerous academic papers despite his busy schedule. In summary, he has published 4 books, 2 booklets, with more than 20 papers in reputable journals (including ISI/Scopus indexed journals), books/proceedings and conferences, both locally and internationally. He has achieved a reputation in research on issues related to education, religion and the Chinese in Malaysia.

He also speaks regularly at conferences and seminars and writes regularly on similar issues in the Malaysian media, in both English and Chinese. Dr. See is also an active member of society; he has held directorship and membership in various organizations, including the Good Shepherd Kindergarten, Centre for Malaysian Chinese Studies, and etc. He plays badminton, has a love for singing, a handyman (as a hobby) and lately, pursued a new hobby in painting, using both watercolor and pencil. His life mission is to be a Renaissance man as he loves learning new things and to remain knowledgeable in a wide range of fields available.