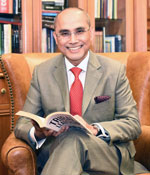 The name Management and Science University (MSU) has become synonymous with quality education that is both transformative and enriching. Making an impact in Malaysia, Asia, and the rest of the world, its rise to prominence is owed to the visionary leadership of MSU President and Founder, Professor Tan Sri Dato’ Wira Dr Mohd Shukri Ab. Yajid.

With a blueprint curriculum and ecosystem, he led MSU to the Most Entrepreneurial Private University Award from the Ministry of Education Malaysia. MSU rates Excellent on the Ministry’s SETARA National Rating System, and, with 98.7% of MSU graduates able to secure a job six within months of graduation, #1 for graduate employability among the nation’s varsities in the Ministry’s graduate tracer study.

Currently ranking as a World Top 100 among the world’s Top 50 Universities Under 50, QS Top 200 among Asia’s best universities, and Times Higher Education (THE) Top 301+ for University Impact, MSU listed in the Top 51% of the world’s best universities in QS WUR 2020, as well as Top 200 for impact on global health and well-being, gender equality, and reduced inequalities.

MSU has also been awarded Platinum 5 Crowns by the UK’s Accreditation Service for International Schools, Colleges and Universities (ASIC); and QS-rated 5-Stars on the metrics of Teaching, Graduate Employability, Facilities, Social Responsibility, and Inclusiveness.

Education for all and a passion for holistic, balanced, well-roundedness

The MSU President’s vision in establishing the University and MSU Foundation is for equal access to education as a means to transforming lives and enriching future. With scholarships worth millions of Ringgit, no dream gets left behind in worldwide journeys to a better future.

Professor Shukri steered the founding of the ASEAN Scholars on International Education Network (ASCIEN) with the aim of internationalizing higher education in the ASEAN region. He also initiated the MSU International Centre for Cyber Security which collaborates with local authorities as well as international partner industries and universities in undertaking research, training, and education on matters of systems and security.

His significant leadership in education and its development has rewarded him with the rare and prestigious Distinguished Fellowship Award from Athlone Institute of Technology (AIT), Ireland. His exceptional achievement and successful business transformation earned him the Middle East & North Africa and Asia Best Business Leaders Award 2015 and the Union of National Business Ratings (UNBR), Kazakhstan: "Pride of Education" Award 2016.

For promoting borderless education through global mobility, and opening access to medical education in Eastern Europe, he was awarded the Dr Tytus Chalubinski Medal from Poland’s Medical University in Warsaw. Professor Shukri has been made a Life- Time Senator by Hof University in Germany, and is an Honorary Doctorate of Korea Maritime University for his work establishing strong ties between Malaysia and Korea in the area of education.