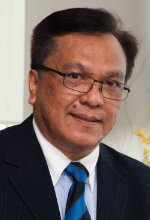 Professor Dr Mohamad Kadim Suaidi was born on 24 October 1960 in Kampung Bako, Kuching, Sarawak. Mohamad Kadim had his early education at St Joseph's School, Kuching. He began his career as a lecturer at Universiti Teknologi Malaysia (UTeM) in 1984 before joining Universiti Malaysia Sarawak (UNIMAS) in 1994. He served almost 10 years in UNIMAS as, Program Coordinator for Electronics and Telecommunication Engineering, Deputy Dean (1998), Dean of the Faculty of Engineering (1999). In 2003, Mohamad Kadim joined UTeM and held these positions: Dean of the University Industry Centre, Dean of Research and Innovation Management Centre, Deputy Vice Chancellor (Research and Innovation), and Deputy Vice Chancellor (Academic & International). On 16 April 2013, he became the sixth Vice Chancellor of UNIMAS, Through his dedication and significant contribution in the academic field and university's administration, he was accorded the prestigious Pingat Perkhidmatan Bakti (PBB) in 1999 and Darjah Indera Mahkota Pahang (DIMP) in 2010. Professor Mohamad Kadim has made it his personal commitment to see higher education in Sarawak, in particular at UNIMAS, become on par with the standard and quality expected elsewhere in higher education insitutins in Malaysia. The university's visibility at the regional and international stages is one of his main agenda. He is very focuesd in bringing UNIMAS' ranking and rating to a higher level, to exceed expectations set for a public comprehensive university in Malaysia.

UNIMAS has already established its reputation nationally in the areas of Infectious Tropical Disease, Biodiversity and Environmental Conservation as well as Social Informatics and Rural ICT. The focus of the university now is to enhance its strength regionally and internationally through strategic collaborations with international partners and collaborators.