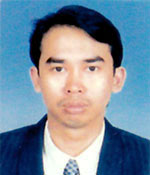 In his many years at Astin Management College (AMC), Chief Executive Officer Mr. Abdul Rahman bin Kasbi has met thousands of graduates. Mr. Abdul Rahman obtained a Master of Science in Corporate Communication in 2001 and a Bachelor of Agribusiness, majoring in Management in 1996, and has served AMC for 11 years.

Mr. Abdul Rahman joined AMC in 2001 as a lecturer, working as a tutor in Universiti Putra Malaysia a year earlier. In recognition of his contribution, he was promoted to various positions in AMC before he was appointed Chief Executive Officer in January 2011. Under his leadership, AMC has made tremendous progress in creating more opportunities for many to pursue higher education in the management field.

Mr. Abdul Rahman thinks that an ideal graduate is an individual who has powerful intellectual capacity and the necessary skills to increase their marketability and be able to survive in the contemporary competitive job market. With his knowledge, experience and expertise, Mr. Abdul Rahman places strong values in building both the physical and mental character of graduates in order to shape them to be better people. Therefore, parallel to the job market needs and demands as well as to produce quality human and intellectual capital, AMC has been placing a lot of emphasis on effective interpersonal and soft skills especially in team orientation, communication skills, analytical and critical thinking, problem solving ability and adaptability to change in both curricula and campus activities.

Established in 1997, AMC places strong commitment in education achievement to mould well-rounded and qualified graduates employable by the public and private sectors.

In keeping to these beliefs and commitments, Mr. Abdul Rahman with the team at AMC continue to mold and train the young people to be adaptable, flexible and quick to learn, in order to be proficient team players with a fundamental fighting spirit to win and survive in the present job market.