by StudyMalaysia.com on November 1, 2012 | Useful Tips 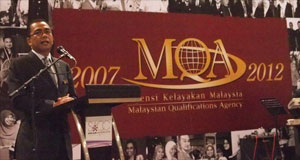 The focus of SETARA '11 was on the quality of teaching and learning at level six of the Malaysian Qualifications Framework (undergraduate level). In contrast, the aim of MyRA® was to assess the level of activity in research, development and commercialisation (R&D&C) at public HEIs as well as private HEIs with the status of university, university college or foreign university branch campus.

SETARA '11 is the third such rating exercise, with the previous two carried out n 2009 and 2007 respectively. This time round, HEIs in the Open and Distance Learning (ODL) category were included for the very first time.

The evaluation process and mechanism of SETARA '11 and MyRA® was carried out by two independent committees that were appointed by MQA and MOHE. Both committees were madeup of experts from public and private HEIs as well as academics with experience in R&D&C. The chairman of both committees was Prof Muhamad Jantan from Universiti Sains Malaysia.

It is the aim of SETARA '11 to enhance the quality, autonomy and performance of HEIs in Malaysia and this forms part of MOHE's initiative to inculcate a culture of continuous quality improvement and increase the competitive edge of HEIs in the country. Teaching and learning was chosen as the focus of this rating exercise as it is the common denominator for all HEIs and consequently, ensures a level playing field.

The rating used in SETARA '11 determines how far a HEI has come in meeting the benchmark set by the respective quality indicators. Its purpose is not to produce a ranking of the HEIs involved. The rating instrument is divided into three generic domains, that is, input (talent, resources and governance), process (curriculum matters) and output (quality of graduates and graduate satisfaction). All together, there were 26 criteria and 62 indicators. The weights of these primary domains – input, process and output – used in the SETARA '11 instrument remained at 20:40:40. 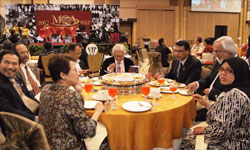 The SETARA '11 committee held a series of workshops, consultations sessions with HEIs involved, and a comparative analysis which included a pilot test on two universities prior to developing the rating instrument. This is to ensure that the instrument developed truly meets the aims of the rating exercise. ODL institutions used a special instrument designed to assess open and distant teaching and learning methods – the assessment comprised 23 criteria and 52 indicators.

The performance of HEIs were categorised using six tiers, with tier 6 representing 'Outstanding' as the highest tier and tier 1 'Weak' as the lowest tier. Based on the data collected in 2011, the results for SETARA '11 showed that 35 institutions achieved a Tier 5 category (Excellent) out of the 52 universities and university colleges rated. Sixteen institutions were rated Tier 4 (Very Good), and one in Tier 3 (Good). None of the universities or university colleges received the highest Tier 6 rating (Outstanding), nor the lower Tiers 2 (Satisfactory) and 1 (Weak).

There was a marked increase in the number of HEIs that achieved Tier 5 in SETARA '11, that is, 67.3% or 35 HEIs compared to 38.3% (18 HEIs) in SETARA '09. This positive development shows that the HEIs concerned have taken the initiative to increase their quality of teaching and learning in the span of two years.

As for the star rating of MyRA® which rates the research, development and commercialisation (R&D&C) performance of HEIs, the instrument used measures the input, process and output of eight criteria, namely, the quantity and quality of researchers (25%); quantity and quality of research (30%); quantity of postgraduates (10%); quality of postgraduates (5%); innovation (10%); professional service and endowment (7%); networks and linkages (8%); and support services (5%). The aim of MyRA® is to encourage a research culture at HEIs which in turn, will produce high impact human capital, publications and intellectual property.

The MyRA® star rating awards 6 stars as the highest performance level, and 1 star as the lowest. Overall, the 39 HEIs assessed in MyRA® 2011 performed well. Based on 2011 data on HEIs, the results are:

The results reflect the intensity, ability, and capacity of the research universities as well as the inclination of private HEIs to increase their ability in R&D&C. As an incentive to HEIs to increase R&D&C activities, a research programme grant worth RM10 million will be awarded to two HEIs that are not of research university status, and which obtained a 5 star rating in MyRA® 2011. The two universities that has been chosen for this award are Universiti Islam Antarabangsa Malaysia and Universiti Teknologi Petronas.

In summary, MOHE will utilise the results of SETARA '11 and MyRA® 2011 as valuable input in formulating suitable higher education policies. Both SETARA and MyRA® will be repeated in three years, that is, during the period from 2014-2015and in the meantime, MQA and MOHE will continually improve the rating instruments to reflect current developments. It is hoped that more HEIs will participate in both rating exercises in the future. 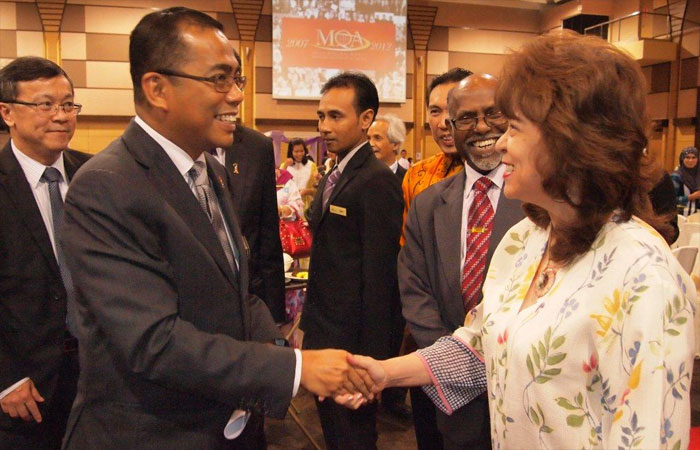 1. RESULT for SETARA'11 (Rating System for Malaysian Higher Education Institutions 2011) The SETARA'11 exercise classifies its rating into six Tiers, ranging from Tier 1 as Weak to Tier 6 as Outstanding. SETARA focuses on the quality of teaching and learning at undergraduate level. The following is the full result for year 2011, listed in alphabetical order:

The 2011 Rating System for Malaysian Higher Education Institutions (SETARA ' 11) measures quality of teaching and learning at level six of the Malaysian Qualifications Framework (undergraduate level) in universities and university colleges in Malaysia.

The SETARA ' 11 rating instrument covers three generic domains of input, process and output to access the quality of teaching and learning. The input domain addresses talent, resources and governance. The process domain focuses on curriculum matters and the output domain is on the quality of graduates and graduate satisfaction.

The SETARA ' 11 exercise classifies its rating into six Tiers, ranging from Tier 1 as Weak to Tier 6 as Outstanding. The following is the full result, listed in alphabetical order:

One institution was not rated because it chose not to participate.

An Employer Survey for SETARA ' 11 was conducted jointly by GRADUAN and MQA.

The MyRA® star rating awards 6 stars as the highest performance level, and 1 star as the lowest. MyRA® rates the research, development and commercialisation performance (R&D&C) of higher education institutions that are designated with full university status. The following is the full result for year 2011, listed in alphabetical order: