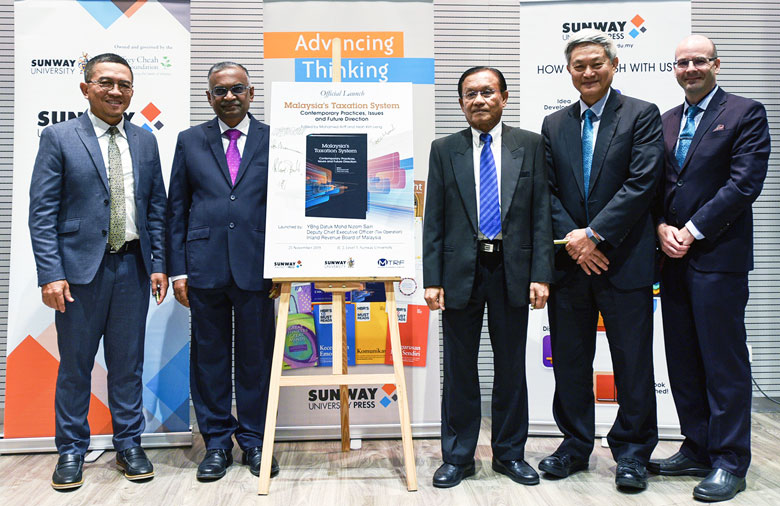 The book also aims to provide insights into the transformation of taxation practices and how the taxation system should and will look like in the future. Each chapter in the book is contributed by respected minds in the tax, business, legal and accounting fields. Professor Yeah Kim Leng, Senior Fellow, Jeffrey Sachs Center on Sustainable Development at Sunway University, Deputy President of the Malaysian Economic Association, Trustee of MTRF and Member of Bank Negara’s Monetary Policy Committee; and Professor Mohamed Ariff, Distinguished Professor and Head, Department of Economics and Finance, Sunway University are editors of the book.

“Taxes have been around for as long as time itself. Other than financing the expenditure of the country, taxes are needed to correct any economic inequality which may exist. Taxes not only go to the funding of social amenities and infrastructures such as roads, hospitals, schools, safety and security of the nation, it is also used to redistribute income to targeted groups, through the numerous aids from the government.

Without taxes, we would not be able to maintain the sovereignty of our country and would have to depend on funding given by international bodies as is the case in certain parts of the world. We are indeed fortunate that tax policies, which have evolved over the past seven decades in Malaysia, have proved to be beneficial in spurring the economic and development agenda of the country.

Nevertheless, the everchanging nature of business models spurred by globalisation and digitalisation requires tax administrations to be robust in the face of these changes in order to protect the tax base of the country”, said Datuk Mohd Nizom Sairi who read out the Chief Executive Officer (Tax Operations), Inland Revenue Board of Malaysia, Dato’ Sri Dr Sabin Samitah’s speech as he was unable to attend the launch.

According to Dato’ Sri Dr Sabin Samitah, “We must be abreast, if not ahead, of the changes by having in place a tax system which is flexible enough to cater to a new business environment where the borderless economy and emerging markets take centre-stage. The inter-connectivity of businesses across borders requires tax administrations to have the right acumen in navigating the tax landscape of the country, by having in place domestic tax laws which are in line with international best practices.

Collectively, we need to understand not only the tax laws governing our borders and home country but also that in other parts of the world.” SM Thanneermalai said the book is a launch pad for anyone who wants to understand Malaysian tax issues from a macro perspective, looking at the current issues faced by policy makers, enforcement agencies, economists, practitioners, academics and tax payers.

For all stakeholders from the Ministry of Finance, Inland Revenue Board and Royal Malaysian Customs Dept to stakeholders in the private sector, academics, tax professionals, politicians and other outside observers and participants; the book is a starting point to understanding the intricacies of the Malaysian tax system.

The book is available online at press.sunway.edu.my and at major bookstores which such as Kinokuniya, MPH and Gerakbudaya.