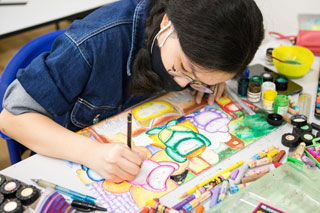 Although much of the 2020 school year was spent learning at home, students, especially those in secondary schools still face the question of what comes next? For many, their unwavering dreams of pursuing an art education was as strong as ever evident by the turnout of this year’s Malaysia Top 10 Outstanding Young Artists Awards despite the ongoing pandemic situation. On competition day, participants began queuing up early in the morning and the crowd did not stop as more and more hopefuls came forth to put their art skills to the test and walk away with a coveted scholarship. For many, this was the golden ticket to kickstart their creative journey.

The nationwide secondary school art competition organized by The One Academy that spanned over the months of September to October has come to a close on 28th November 2020 with the winners’ announcement and prize-giving ceremony held online. Despite the pandemic that hit this year, The One Academy continues its effort to bring the 23rd edition of this annual competition that serves as a platform for many young artists to showcase their talents and pursue their dreams.

The competition received more than 2,000 entries from participants from over 300 schools nationwide. The students were undeterred by the restriction circumstances and continued with their participation, a display of their passion for art and determination. Traditionally, the MT10 competition collaborates with Pixar Animation Studios as seen in all its previous editions. However, this year was an exception as the launch of the partnering movie with Pixar was postponed.

The competition adopted the apt theme of “A Rainbow After a Storm”, a metaphor to describe that moments of hardship will gradually pass. Participants were asked to use their wildest imagination to portray the visual of a new world or life transformation after surviving the tough times. The coveted Gold Award trophy and The One Academy scholarship worth RM80,000 as well as RM2,000 cash prize was won by Phoebe Su Yuin Zhen from Sarawak. Following that, Silver Award winner Wong Shu Hou from Perak and Bronze Award winner Chee Ying Xuan from Sabah won scholarships worth RM60,000 and RM40,000 respectively as well as cash prize of RM500 each.

Additionally, the Outstanding Secondary School Art Club award which is conferred to the school that has the highest record of winners selected in the final went to Hin Hua High School Art Club of which three students clinched top spots.

To date, Malaysia Top 10 Outstanding Young Artists Awards has given out more than RM17.4 million worth of scholarships to deserving talented individuals all over Malaysia. This art competition brings out the best and most talented young artists and nurtures them to help lead them to success.

Malaysia Top 10 Outstanding Young Artists Awards will still hold steadfast to its mission to discover new young talents. Those who want to establish a career in the creative industry can pursue their studies at The One Academy, one of the leading creative institutions in the country, who continues to nurture its students passionately through its ‘Masters Train Masters’ coaching philosophy by providing diploma and degree courses namely Advertising & Graphic Design, Interior Architecture & Design, Digital Animation with Game Development, Digital Media Design, Illustration, Movie & Game Art, Film Visual Effects, Fine Arts and ESMOD Fashion Design & Pattern Making. For further enquiries, contact The One Academy at 03-7875 5510, email [email protected] or visit www.toa.edu.my for more information.