Saving Lives With Flood-assist Drone: A Brainchild of Multidiscipline Engineering Students at APU 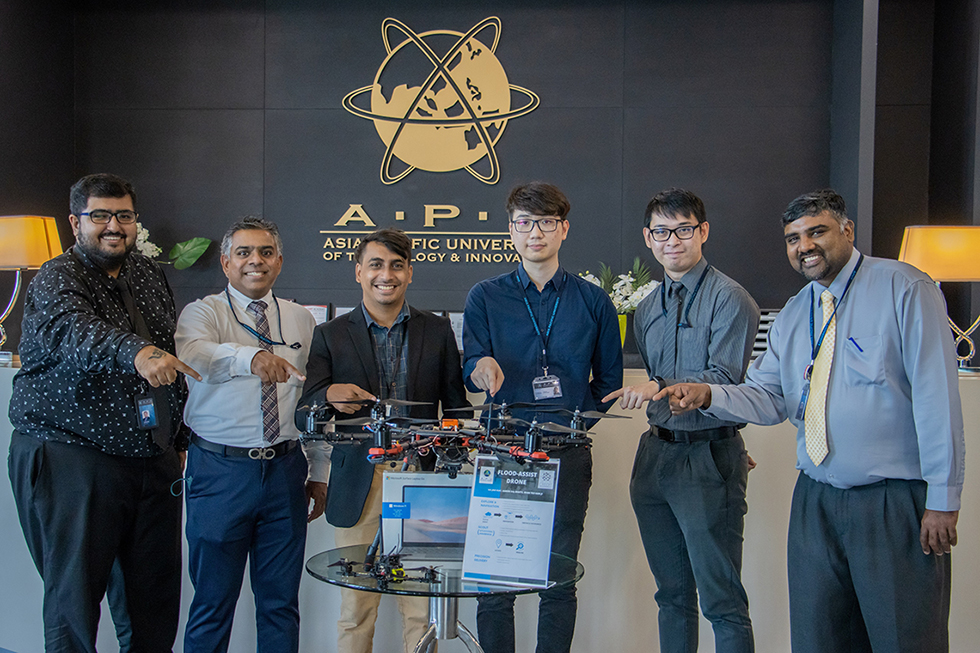 Fellow Malaysians are increasingly worried about the occurrence of floods, especially after the nation’s worst floods struck at the end of 2021, which left dozens dead, displaced more than 61,000 people and caused an estimated RM6.1 billion in overall losses.

To minimize the losses caused by floods, early reconnaissance and search & rescue (SAR) are of utmost import, rescue teams need to have the right technology to get information from disaster areas, especially areas with limited access. However, there is a lack of intelligence and prediction solutions to analyze and recommend SAR action, let alone gather accurate information for decision-making.

To save people who are trapped during a flood by providing critical information to the rescue teams such as the location, and depth of water, Team Delta APU formed by engineering students from the Asia Pacific University of Technology & Innovation (APU) came up with an integrated system which includes drones, the Smart Disaster Application and LoRa sensors.

This project has made Team Delta APU the Grand Prize winner at the Intel Industry-University Challenge 2022, a national innovation challenge that focuses on innovating Smart Retail, City and Industrial Solutions using Internet of Things technology (IoT) and Artificial Intelligence (AI), organised by Intel in partnership with Collaborative Research in Engineering, Science & Technology (CREST), which provided a platform for participants to challenge themselves to generate innovative ideas and develop impactful solutions.

On its functionality, the Smart Disaster Application attached to Flood-Assist Drone could capture the location of the floods and send out SOS signals to the Fire and Rescue Department Malaysia. It could trigger a scout drone and a surveillance drone for further action. The App also has a Natural Language Processing (NLP) chatbot where it can detect mixed languages and convert them to English.

“When floods strike, usual routes that are used to travel to the affected areas may be flooded, hence the Road Segmentation system in our work could help people determine if the road is swamped. This is done by a flood model using YOLO – an algorithm that uses neural networks to provide real-time object detection, as this model is trained to detect people and also floods,” explained Ng Joo Kiat, the team leader.

Furthermore, LoRa sensors integrated into the solution are for the detection of flood parameters, therefore, they are placed in flood-prone zones before the flood occurs. The Integrated System is also complimented by real-time kinematics, or RTK Sensors, that are used for drone positioning with GPS to increase the accuracy of the drone delivery.

The team won the Smart Disaster category with prizes worth approximately RM10,000 consisting of five units of Microsoft Surface Laptop Go. Their victorious joy was also shared by Mr Krishna Ravinchandra, tutor of SoE, as well as supporters from the Centre of Research and Development of IoT, APU.

Commenting on his students’ success in this competition which managed to attract the interest of many participants from universities and industries since it was launched in 2017, Ir Narendran Ramasenderan enthused, “I am very proud that my students are not only trained in a classroom but rather towards a pilot prototype deployment in the real industrial context!”

He said the trio had demonstrated their technical skills in developing autonomous drone systems that integrated with AI through a smart app. All of these were developed by them from scratch using the hardware they had at APU and integrated with the Intel Open VINO Solution, an open-source toolkit for optimizing and deploying AI inference.

“Their greatest strength was their teamwork in working together to solve the problem and troubleshoot the hardware-software integration issues. I saw they could act and think like an engineer, using the skillset and tools at their disposal, just like a multidisciplinary team in the industry, they are very much prepared for their future professions,” cheered the proud supervisor.

Witnessing excellent outcomes which have been borne at the Centre of Research and Development of IoT, Prof Dr Vinesh Thiruchelvam, APU’s Chief Innovation & Enterprise Officer applauded, “At APU, we engineer drones from a bottom-up methodology and most developments are via a multidisciplinary approach bringing in our talents from both the computing and engineering backgrounds to design, code, build, test and deliver our drones on a sustainable landscape for societal benefits.”