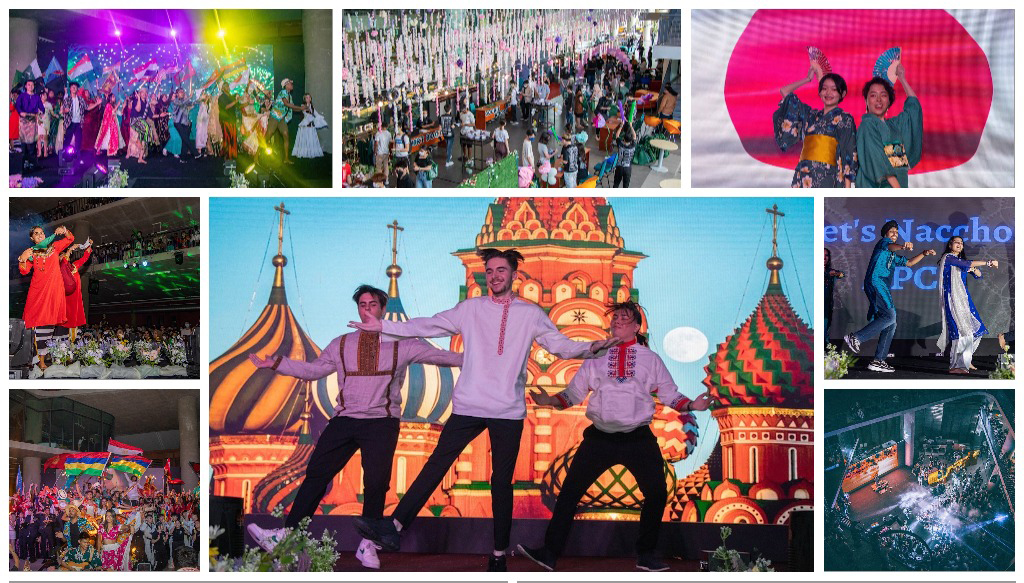 It was not only a melting pot but a beautiful mosaic with different people, different cultures, and different performances showcasing different countries, that were spectacularly portrayed at the recently held International Cultural Night of the Asia Pacific University of Technology and Innovation (APU).

Making a glorious return after a hiatus of three years due to the global pandemic, APU’s International Cultural Night (ICN) which has been the university's iconic yearly event for many years, attracted more than 3000 students, staff, guests, consulate and government officials on the night of the 10th December 2022 with a theme for the year “Garden of Kingdoms”.

“Each culture represents a ‘Kingdom’, and a beautiful ‘Garden’ is where we all come together for this grand gathering,” read its official event booklet that was distributed to every guest. Distinguished guests present were from the embassies of Maldives, Kazakhstan, Uzbekistan, Russia, Kyrgyzstan, Bangladesh, Yemeni, Egypt, Zambia, and Ghana, who joined the gala together with VIPs representing the Higher Education Department, National Department for Culture and Arts, Institute of Language and Literature (Dewan Bahasa dan Pustaka) and Education Malaysia Global Services (EMGS).

Rated number one in Asia and Malaysia for its multicultural learning experience in the i-Graduate Student Barometer, APU is a host to an international community of more than 13,000 students from over 130 countries, where students collectively from a truly diverse community for a truly global experience.

“As the organiser, we are proud of the gigantic turnout. The atmosphere was exactly what we had envisioned and hoped to achieve, with everyone enjoying all the booths that we set up and embracing the performances that we arranged, regardless of the ethnicity involved,” said Sunil Palan T. Sivapalan, 18, the Event Manager who is currently pursuing a Diploma in ICT with a specialism in Data Informatics at APU.

“The crowd’s reaction during the grand finale had provided a truly fitting climax to the event with their loudest cheers, expressing their excitement wholeheartedly for one final performance which saw performers from all over the world with different types of cultures and beliefs uniting as one on the stage – had perfectly wrapped up the show and the entire event!” enthused Sunil.

Overall, there were 27 performances presented by students representing 24 different nationalities. A total of 29 booths were set up during the pre-event, most of which were operated by student clubs and societies promoting their respective cultural elements. Merchandise like T-shirts, Kukurizaru, cheering sticks, and badges also received overwhelming responses and support from all present.

Planning and organising the event started more than 3 months ago, with APU’s Student Representative Council (SRC) forming the core organising team. They received the support of more than 100 crew members who were organised into teams looking after every aspect including performances, decoration, marketing, sponsorships, audio-visual, technical equipment, electrical and maintenance, stage logistics and more.

“It was a successful event with such a beautiful showcase of cultures, and I believe almost everyone felt the same. Seeing everything fall into place perfectly after all the hard work rewarded us – the committees and crew at SRC with a great sense of satisfaction,” said Sunil.

“APU’s International Cultural Night is the best venue for international populations to showcase the beauty and uniqueness of their own cultures. Let’s embrace the beauty of multiculturalism and the diversity that provides such a conducive ecosystem for sharing one’s ideas and perspectives, ultimately leading to shaping our students’ global mindsets and becoming part of a truly global workforce of globalization,” opined Datuk Parmjit Singh, the CEO of APU.