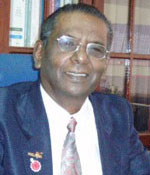 A teacher , lawyer and politician , YBhg Tan Sri Dato’ G Vadiveloo is a well-respected veteran in the Malaysian community .He was former President of the Malaysian Senate (Speaker of the Upper House of Parliament) and has held various senior positions in the Malaysian Indian Congress (MIC). He is also one of the trustees of Maju Institute of Educational Development (MIED) which is the education arm of MIC.

Vadiveloo was trained as a teacher at Kirby College, Liverpool. He attended a special one-year course at the same college and was trained as a lecturer in education. He also specialised in education as an external student of the University of Queensland under the Colombo Plan Scholarship Scheme .

After more than 14 years in the teaching profession, he became a Barrister-at-Law of the Inner Temple and holds the LLB (Hons) Degree from the University of London. He practised as advocate and solicitor for more than 24 years.

Since assuming position as CEO, Vadiveloo has devoted his energy to expanding the range of courses provided as well as the infrastructure, equipment and services provided to ensure that the expectations of the government statutory bodies and local and international students are met. Hostels have been upgraded and state-of-the-art computer facilities have been provided. Under his guidance, the courses and facilities of the College have been enhanced to meet statutory requirements of the regulatory bodies as well as those of collaborative partners.

Vadiveloo was a headmaster of a secondary school and part-time lecturer in education. He was also a supervisor of further education classes.

As a member of the Board of MIED, he has assisted in providing loans to thousands of deserving students for pursuing higher education. He is also a past member of the Higher Education Council. In January 2009, Vadiveloo received the prestigious Pravasi Bharatiya Samman award at the 7th Pravasi Bharatiya Divas from the President of India, Pratiba Patil. Vadiveloo is the third Malaysian to be given this award in recognition of his work for the development on the Indian community in Malaysia .