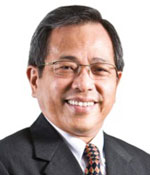 He has a wealth of experience within the education sector with a solid background in educational publishing. He worked with the renowned educational publisher Longman Malaysia for 17 years from 1979 to 1996, where he rose from Regional Sales Executive to Managing Director. In 1997, Mr Wong was appointed the Managing Director of Longman Singapore/Malaysia and in the following year, became the Managing Director of Addison Wesley Longman Asia. In 1999, Mr Wong was named President of Pearson Education Asia when Pearson acquired Prentice Hall and folded Prentice Hall into Addison Wesley Longman. From 2000 to 2002, Mr Wong held the post of President at Pearson Education South Asia. He moved on to become a consultant with India's Bhagat Publications in 2003, and was with a UK publishing house in 2004 before joining Informatics that same year.

Mr Wong graduated from the Universiti Malaya with a Bachelor of Science (Honours). He also holds a Master in Management from The Asian Institute of Management, Philippines.

"NCC Education provides students with a high quality, affordable and flexible route to gaining a British qualification, and I am so proud to be heading such a forward thinking company, enriching thousands of students' lives along the way. I gain great satisfaction hearing about our successful alumni. With the standard of the graduates and quality of the qualifications, it is not surprising that there are so many success stories to be shared."