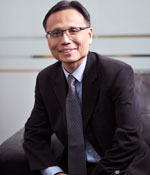 Prof Ir Dr Lee Sze Wei was born on 12 September 1970 in Malaysia. He received primary and secondary education at SJK(C) Yuh Hua, Rembau, Negeri Sembilan and SMK La Salle, Petaling Jaya, Selangor respectively. He obtained Bachelor of Engineering (Hons) in Electronics and Optoelectronics, MPhil and PhD degrees from the University of Manchester Institute of Science and Technology (UMIST), UK in 1994, 1995 and 1998 respectively.

He joined Multimedia University (MMU), Malaysia in 1999 as Lecturer and later Senior Lecturer and Associate Professor in 2001 and 2005 respectively. He was the Postgraduate Programme Head, Associate Dean and Dean during his service in the Faculty of Engineering of the university.

In 2008, he joined Universiti Tunku Abdul Rahman (UTAR), Malaysia as Professor. In UTAR, he served as the Director, Institute of Postgraduate Studies & Research (2008 – 2011) and then the Vice President for R&D and Commercialisation (2010 – 2018). He joined Tunku Abdul Rahman University College (TAR UC), Malaysia as Professor and President in September 2018.

He has carried out numerous research projects in information and communication engineering. He has received funding of total more than a million ringgit for research and has published more than 60 journal and conference papers so far. He has also been very active in collaborating with industry on research and consultancy work. He has been active in providing technical training for the industry. Thus far, he has trained more than a thousand engineers and technologists in the industry.