by StudyMalaysia.com on March 12, 2015 | Higher Education in Malaysia 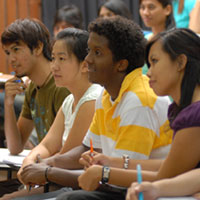 Therefore, there are many types of pre-university programmes available which are designed to accommodate the different learning needs of students aiming to pursue Bachelor's degree programmes in the universities.

The pre-university certificate is the basic qualification for grade 11 holders (SPM or GSCE "O level school leavers) en route to universities' year one (1) Bachelor's degree programmes. The duration of study is between one to two years depending on the learning needs of the students.

Many International Students who pursued their Pre-University programmes in Malaysia have gained placements in reputable universities in the world.

There are many well - established providers of pre-tertiary programmes in Malaysia which are acknowledged internationally for their various achievements. Some of them are:

Edexcel International accorded the Centre of Excellence award to HELP University for exceptional delivery of the London Examinations GCE 'A' Levels, in recognition of HELP's superior facilities, outstanding quality of teaching by qualified and experienced lecturers, and for the excellent pastoral support available to their students. Currently HELP is the largest centre for the London GCE A-level examination outside the UK.

Once the International Students have the basic academic entry requirement, the next step is to decide on which pre-university programme route to take:

Basically, the pre-university programmes in Malaysia can be grouped into 3 types:

A. International Pre-University Qualifications by the External Examination Board

The common types of externally accredited pre-university courses available to students with the GCE 'O' level or its equivalent, to prepare them for higher level of studies such as Bachelor's Degree programmes or professional courses (ACCA, CIMA, etc) are as follows:

GCE 'A' Levels by the University of Cambridge International Examinations (CIE)
After GCSE 'O' levels, students have a choice to continue with the GCE 'A' Levels programme (UK's post-16 qualifications) offered by the University of Cambridge International Examinations (CIE) which is part of the Cambridge Local Examination Syndicate (UCLES). Many private colleges in Malaysia prepare students to sit for this examination which is a popular option among Malaysians as well as international students. It is internationally-recognised for admission into universities worldwide including professional courses.

The A-level syllabuses are divided into Advanced Subsidiary (AS) and Advanced Two (A2) levels, each contributing 50% towards the final A-Level grade. AS Level is the first half of the course and forms the foundation of A-Level. A2 Level is the second part of the syllabus and covers more difficult topics. There are normally between 2 to 4 A-level subjects and General Paper or English is compulsory. The duration of study is usually 15 to 18 months (3 semesters). Both the 'AS' and 'A2' levels are flexible and students have the freedom to select the subjects that they are interested in, either to study a broad variety of subjects or to specialise in a particular area.

For assessment purposes, students can choose any one of the following options:

Assessment
It is 100% external examination-based. Both the 'A2' and 'AS' level examination sessions occur twice a year, in June and November, with some subjects only available in June or November. Results are issued in August and February respectively.

Both Science and Arts subjects are available for students who have just completed their SPM or 'O' Levels examinations (or their equivalent). The programme is flexible and may be completed in 18 months (3 semesters). Students may take the examination in stages or in one final sitting. Most subjects comprise 6 modular units. Students are also allowed to re-sit a unit for an unlimited number of times and only the better grade will be counted. There are two examinations conducted per year (in January and June). Most combinations of at least 3 subjects are acceptable as entry qualifications to many universities in the world into their undergraduate programmes.

SAM has a unique assessment pattern, in which 50% of the final mark is derived from the final examination while the other remaining 50% is internally-awarded through continuous assessment of coursework and tests, thereby assessing the student's overall performance. It offers students the flexibility to complete over an extended period although the normal duration of study is one year. The curriculum consists of five subjects and students must take up English as a Second Language Studies or English Studies. Students can alsorepeat subjects without a penalty. Students will be awarded  the South Australian Certificate of Education (SACE).

The intake for students is only held once a year. The minimum qualification for admission into the SAM programme is the 'O' Levels or equivalent qualifications, with at least 5 credits totaling not more than 30 points, including credits in English and Mathematics / Science.

The AUSMAT is an internationally-recognised pre-university programme administered by the Curriculum Council of Western Australia on behalf of the Western Australian government. Students are graded based on their performance throughout the year, i.e. 50% course and project work and 50% final examination. This arrangement not only helps to remove pressure of the single year-end assessment, but also provides opportunities for the usage of a variety of assessment techniques in determining students' standards of achievement.

The entry requirement into AUSMAT is SPM, 'O' Levels or other equivalent qualifications, with a minimum of 5 credits in subjects of Science and Mathematics. The student intakes are in January and March. The course duration is between 8 to 10 months and students are required to take up five subjects including either English or ESL.

Canadian International Matriculation Programme (CIMP)
The Canadian International Matriculation Programme (CIMP), which is also known as the Canadian Pre-University Programme (CPU) is the final year of the secondary school programme in Ontario, Canada. It was established in 1990 and has since grown to become the largest Canadian Matriculation programme in the world. It is designed based on the course guidelines and standards of the Ministry of Education and Training of the Ontario Province. Upon meeting all requirements of the programme, students will graduate with the Ontario Secondary School Diploma (OSSD).

CIMP is a one-year (1) course based on an Ontario Curriculum and students take a total of six subjects which include one English subject, that is, either ENG4E or ENG4U. Assessment comprises 70% coursework and 30% final examinations. Intake is three times a year i.e. January, March and July. The minimum entry requirement is five (5) credits in SPM, O-Level or equivalent.

International Baccalaureate Diploma Programme
The International Baccalaureate (IB) Diploma Programme is another recognised pre-university qualification for entry into degree courses of the world's leading universities. Created in 1968, this Diploma Programme is a comprehensive 2-year curriculum, primarily aimed at students aged 16 to 19. This programme requires students to study both the humanities and science subjects. There are altogether 6 subjects which include English, Maths, a foreign language, science, social science like history or geography and a creative subject like drama or art.

It is fast becoming a preferred pre-university course. This is because the programme offers a broad and balanced curriculum related to real world issues and problems. Wherever possible, subjects are taught from an international perspective. The programme is open to Malaysians and International Students and the entry requirement is SPM or GCE 'O' level.

Form Six comprises the lower form and upper form and is conducted over a duration of one and a half years. The examination body, Majlis Peperiksaan Malaysia, allows students to enroll for the examination with a minimum of one (1) subject and a maximum of five (5) subjects (including General Studies). There is only one intake per year in the month of May.

Besides the local universities, the STPM certificate is accepted by the world's leading universities for entry into degree programmes.

Each stream offers at least six subjects and the duration of study is two semesters totaling one year. The intake of students into Matriculation Colleges is conducted once a year in March or April.

Many private higher educational institutions, especially those offering twinning degree programmes have developed their own internal university foundation programmes. These courses are usually accredited by the Malaysia quality assurance agency (MQA) and recognised by the respective foreign partner universities and also accepted by many other overseas universities as an equivalent to pre-university qualification in their respective home countries.

Unlike the external qualifications which focus on more general Science and Art-based subjects, the internal qualifications provide specialisation in precise areas of study such as the fields of business, computer & IT, and engineering, and hence, cater to the specific needs of different students.

There are basically three intakes a year for these internal university foundation programmes, which would usually take a period of one year to complete. The general entry requirement for admission into these university foundation programmes is the SPM, GCSE 'O' Levels or other equivalent qualifications, where students are required to possess a minimum of 5 credits in relevant subjects.

Among some instances of internal pre-university programmes individually offered by the private colleges are the:

Table below indicates the general guidelines on minimum admission requirements into Malaysian institutions for students of overseas countries.

Source : Prospectus of Taylor's College & Curtin University of Technology Sarawak Campus Malaysia
(Please note that the minimum admission academic requirements stated here are merely guides and students are advised to contact individual institutions for enrolment requirements as well as other terms and conditions.)

The Cost of Pre-University Education

The cost of education consists of the tuition fees which include the registration fee, deposit, computer/science laboratory fees, library fees and other incidental costs. The other portion of the cost would include living expenses like food, transport, stationery, accommodation, etc.

One of the important factors that attracts International Students to choose to study in Malaysia is the low tuition fee. Table below shows the breakdown of tuition fee for Pre-University and Foundation programmes.

Malaysian pre-university providers have created many firsts and the world's biggest in preparing students for pre-university qualification. Many International Students who have studied here have also being placed in top universities worldwide.

With such proven track record since the 1970s, Malaysia offers international students among the best options to do pre-university programmes. If you choose to continue your undergraduate studies in Malaysia after obtaining your pre-university qualification, there are many choices for you to choose from such as the '3+0' degree programme, foreign university branch campus degree, twinning degree arrangement and etc which are being offered at very competitive course fees.