Facing a pandemic does not have to be a barrier in creative learning and The One Academy proved just that by organising a series of sharing sessions hosted by international creative experts from all over the world! The Live International Masterclass was held in a bid to motivate the youth to embrace creativity especially during these tough times. The event consisted of six sessions held over a month headed by creative experts such as former Animation Director from Pixar, Andrew Gordon; Coding & Algorithm Master, Raven Kwok; Architect of Olympic’s Beijing National Aquatics Centre, Chris Bosse; Pixar Character Designer, Dan Holland; International Luxury Fashion Brands Strategist, Véronique Beaumont and award-winning Graphic Design Guru, Pum Lefebure sharing valuable information, industry insight, exclusive tips to achieving creative success and more.

The exciting virtual event kicked off with an insightful session by none other than Andrew Gordon, Animator of Pixar favourites such as Toy Story, Finding Nemo, Ratatouille, A Bug’s Life and more! During his session, Andrew emphasised the importance of having not only good animation chops, but also great storytelling skills to back it up. He shared valuable info on how to build a good story, gave critical feedback as well as touching on the culture of creativity. Audience understood first-hand from an expert the steps to take to produce a remarkable story and how to elevate it to greater heights. His advice to reach success in the animation field was to “start making stories and start practicing, whether you write a story about a book or something else, just start writing stories and you will be successful”.

The second session was hosted by award-winning Visual Artist and Creative Technologist Raven Kwok whose portfolio boasts numerous captivating projects such as Rule 110, Portal, Doge Chorus, Autotroph and more. In his sharing, Raven explained about his general workflow, describing the process of producing his remarkable masterpieces step-by-step. He also elaborated on his experiments thus far, starting from his research on K-D Tree structure back in 2016 and its transitional connections to his other creations that were derived from this research. The audience were captivated by his hypnotic projects and took this opportunity to get an expert’s take on everything digital media. Raven’s key advice to the participants was to “always be mentally ready to get out of your comfort zone. Digital media comprises of many aspects and you might need to study something that you might not be familiar with, so be prepared to struggle to make progress, however you must persevere”. 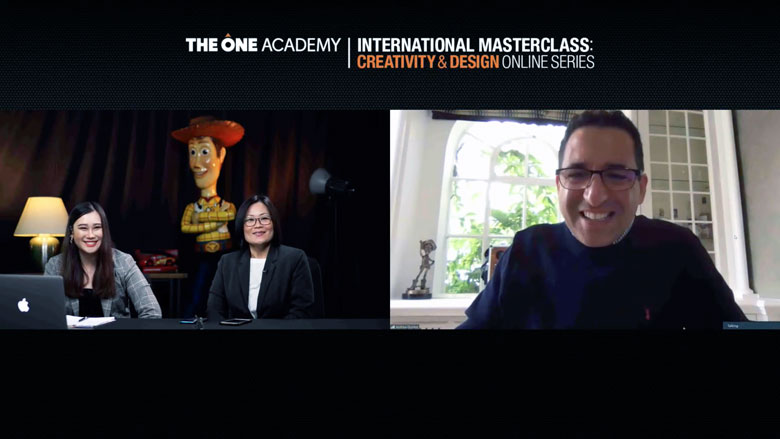 Week number two saw to visionary architect and master planner Chris Bosse whose works include Moet Marquee, Digital Origami, Masdar City Centre and the iconic Olympic’s Beijing National Aquatics Centre. He shared on the importance of creating architectural works that learn from nature and mirror its styles, shapes and texture, creating more organic looking structures. He also shared his vision for buildings of the future that embrace this concept and make for eye-catching designs. His advice to students includes practicing diversification in design to ensure they are able to produce a variety of works as opposed to being highly specialised in one architectural field. “Define what success means to yourself, then find something that you are really passionate about and push as hard as you can”, he advised.

Following this was Dan Holland, Pixar’s Character Designer for the past 17 years and projects include Toy Story 4, Inside Out, The Incredibles and more. His session was on the principles of film design where he touched on film, character and set design, explained the process behind each of these and imparted valuable insight. He advised the audience to take inspiration for their designs from their own experiences and to create images that speak to people not just visually but emotionally as well. In order to make truly excellent works “you have to have strong ideas, cleaver visuals and thoughtful, purposeful designs” he concluded.

The fifth session was headed by none other than international Luxury Fashion Brands Strategist, Véronique Beaumont who has worked with many luxury brands including Karl Lagerfeld, Paco Rabanne, Sonia Rykiel, Christian Lacroix and more. A veteran in the industry, Véronique shared on how the future of fashion is changing by leaps and bounds starting from the design aspect to the production process and even distribution platforms. She emphasised the importance of utilising digital communication, social media and technological tools to grow and drive brands to success. Her advice to listeners was to “be aware of the culture, understand the era that we are in and always hone your creativity as it is the most important soft skill”.

The last Masterclass was by Pum Lefebure, award-winning Graphic Design Guru, Co-Founder and Chief Creative Officer of Design Army who has remarkable accolades to her name garnered through exceptional work for clients such as the Academy Awards, The Ritz-Carlton and PepsiCo. Her session aimed to shed light on the purpose of designers and help them understand their roles in this period of time. She walked the audience through her experience as a designer, her background and the path that led her to where she is today. She also shared the design processes of some of her projects. She said that, “As a creative practitioner, be passionate and confident about your work because it comes from you, therefore it’s unique.”

This successful event stands testament to The One Academy’s promise to bring creative learning in Malaysia to new heights and inspire youth to embrace art and design.