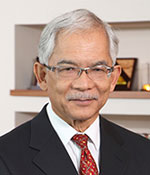 He became a fellow of the Royal Australasian College of Physicians and did his postgraduate training in nephrology at Georgetown, University Hospital, Washington DC (USA) and Prince Henry’s Hospital in Melbourne (1975-1976). He attended the Advanced Management Programme at Harvard Business School in 1991.

He started the Department of Nephrology and developed the nephrology and dialysis services at Hospital Kuala Lumpur and extended this to other hospitals in the country.

He was Director General of Health Malaysia from 1991 to 2001, and was appointed President of International Medical University in 2001.