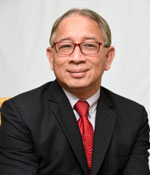 The election of Professor Kamal as the new Vice Chancellor was finalized by the Board of Directors of UNITEN, taking into consideration his academic experiences, research and his past management portfolio in UNITEN. In addition, his engineering background is parallel with UNITEN’s portfolio as a university well known for its engineering programmes. It is hoped that this new election will propel UNITEN into a new higher level, continuing UNITEN’s enhancement plan in research and innovation as well as enhancing the academic quality of the lecturers and students.

Professor Kamal, who was born and bred in Machang, Kelantan, received his PhD in Structural Fire Engineering in 1995 from University of Aston, Birmingham UK. He obtained his Honours Degree in Structural Engineering 1987 from Heriot-Watt University, Edinburgh, Scotland UK, while his first degree was obtained from University of Sheffield, UK. Professor Kamal was once the Dean of College of Graduate Studies (COGS) from 2010 to 2011 before he was elected the Deputy Vice Chancellor (Student Affairs, Alumni and Management) since March 2011 to 4 May 2015.

Prior to joining UNITEN, Professor Kamal was the Director of UNITI Sdn Bhd (1996 – 1999) at Tanjung Agas, port Dickson. On January 2001 until August 2003, he was promoted as the Chief Executive Officer of Kolej UNITI Port Dickson.

His leadership persona is evident with the various national positions, among which, the President of Majlis Sukan IPTS Malaysia (MASISWA), Director of Yayasan Canselor UNITEN, one of the evaluator panels for Engineering Accreditation Council since 2007, Chairman for the Program Standard in MQA 01 Area 5 and IEM-SWO Technical Committee on Design Standards for Concrete Structures, IEM from 2007 to 2010.

As an academic member, Professor Kamal is known to be active in various forensic engineering and civil engineering researches.